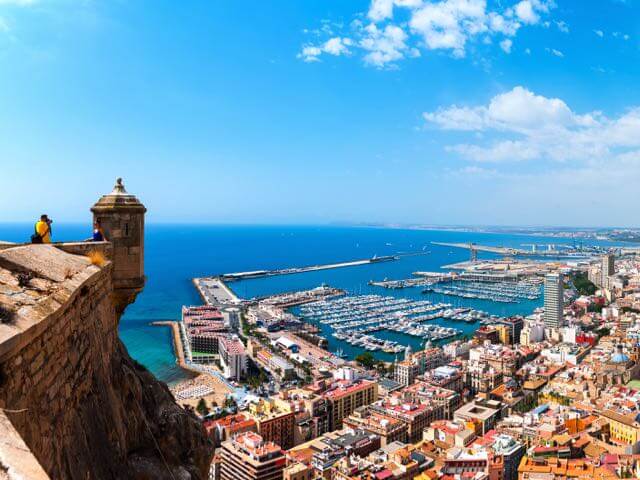 Culture, history, great food and miles of glorious beaches all combine to make Alicante one of Spain’s most attractive destinations. Alicante package holidays offer the chance to get to know this fascinating, vibrant city and explore the beautiful scenery of the Costa Blanca. Whether you are looking for a relaxing beach holiday or a cultural weekend city break, Alicante has everything you need. Soaring temperatures, stunning cuisine, crystal clear waters and breathtaking sights mean that there is always something to seeand do on city breaks to Alicante!

What To Know Before Visiting Alicante

Situated on the Costa Blanca in Spain, Alicante is a popular tourist destination where the Euro is used as currency. Whilst cash machines are plentiful throughout the city, it is wise to stock up on a little local currency when booking your flight and hotel Alicante package. Spain is in the central European time zone, (GMT+1) so don’t forget to set your watch when you get off the flight from Dublin or Cork.

The city is served by Alicante Airport. Located only 10 km from the city centre, the airport offers excellent bus links and a fleet of taxis ready to whisk you to your hotel. It is worth noting, however, that the express bus direct into the city costs a good deal more than the regular city bus options, so if you are in no great hurry, you could save yourself a few Euros by taking the more leisurely option.

When Is The Best TIme To VIsit Alicante?

A flight and hotel package to Alicante is always a good idea but there are many festivals and events throughout the year that make a trip to the city especially worthwhile. In June the annual Bonfires of Saint Joan festival kicks off a riotous week of parties, fireworks and music. Commencing on the 19th, festivities run day and night until the 24th, when a big bonfire is lit to celebrate the summer solstice. There is plenty of local food and wine on offer - and it might be wise to anticipate a few late nights.

Another exciting time to enjoy a weekend in Alicante is at the end of April, during the Moros y Cristiano (Moors and Christians) festivities. Towns and cities throughout the Alicante region commemorate the battles which took place across Spain between the 8th and 15th centuries. Expect plenty of colour, gunpowder and parades - with a few wild nights thrown in for good measure. Festivities take place across the area and were even taken across the Atlantic with Spanish Conquistadors.

What Is There To Do In Alicante?

City breaks in Alicante offer a great opportunity to explore the beautiful coast of the Costa Blanca. The Ocean Race Museum provides a fascinating look at both Alicante’s links to the sea and one of the most demanding and exciting sporting event in the world. Held every three years, this round the world yacht race starts from Alicante. This fully interactive museum offers the chance to find out more about the boats who take on the ocean waves in what is considered the ultimate test of sailing endurance.

The Museum of Contemporary Art takes the adrenalin down a notch but is no less remarkable. This magnificent gallery takes up an entire city block and is home to works by such celebrated Spanish artists as Picasso, Miro and Tapies. A truly spectacular building in its own right, the Museum also houses the Casa de La Asegurada, a 17th century granary which is an unmatched example of ‘Valencian Baroque’ architecture.

What Are The Places To Visit in Alicante?

Where To Eat In Alicante

It can be hard to decide what is better at Taberno del Puerto - the food or the views. This fabulous seafood restaurant offers the very best of the day’s catch and wonderful views of the harbour and the castle. An Alicante fixture for over fifty years, this beloved spot is known for its simple but authentic Spanish food, a lively atmosphere and the friendliness of its staff.

Those looking for something a little fancier are should head to The Lobster Restaurant on the Playa Flamenca. With stunning views across the seafront and a menu that features high-quality steaks alongside the restaurant’s signature lobster dishes, this is fine dining - Alicante style!

What To Bring From Alicante

Nothing is more evocative of Alicante package holidays than paella, so why not bring a starter kit home with you? It’s easy to find kits containing a special paella pan as well as all the spices and stock you’ll need to whip up a perfect paella in your very own casa. What better way to round the evening off than with a glass of Mistela wine? This locally-produced aperitif is aged in oak barrels in the nearby Jalon valley and makes for the perfect reminder of your Alicante package holiday.