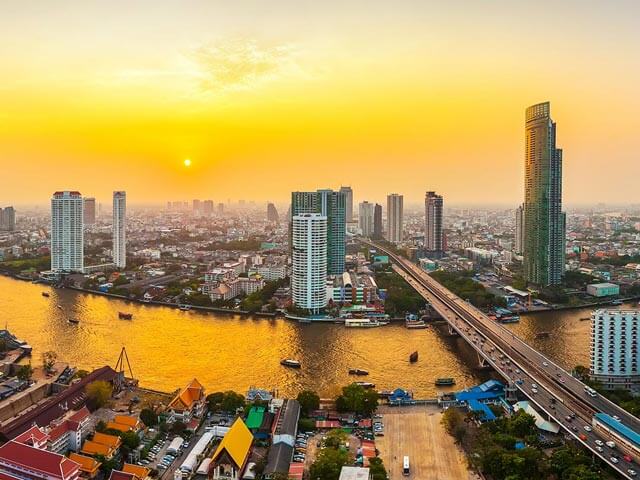 Touching down in exotic Thailand, Bangkok is your first port of call. The city distils the many delights of Thailand in its teeming heart, from sacred shrines gleaming with gold to streets hissing with mouthwatering, pan-tossed pad thai. The city is at once a wild dance of tuk tuks and as serene as its orange-robed Buddhist monks. Discover hidden markets and delicious, fresh Thai cuisine. Deck yourself out in tailor-made Thai finery. Marvel at dizzying skyscrapers and 200 year old homes. Electric nightlife in districts like Sukhumvit is balanced by the tranquillity of the traditional long tail boats that glide down the river. It all coheres with the elegance of the orchids handed to you at every opportunity by welcoming locals. Read on to find out what makes package holidays in Bankok so special. Glittering with sacred shrines, steaming with fresh pad thai and buzzing with tuk tuks and joie de vivre, city breaks to Bankok are hard to resist.

What To Know Before Booking A Flight And Hotel In Bangkok

A flight and hotel in Bangkok are both easily organised from the UK. Direct flights from Dublin to Bangkok depart frequently, as do flights from Cork to Bangkok. Thailand is six hours behind the UK (GMT-6). Connections from Don Mueang International Airport are convenient and inexpensive. The local currency is the Thai Baht. If you don't speak Thai there is no reason to worry as most locals speak good English and are generally exceptionally kind. Just don't be fooled by the overly high prices initially quoted by tuk tuk drivers. Tipping is not expected but is appreciated.

When Is The Best Time To Visit Bangkok?

An understandably popular city with international visitors, Bangkok's population swells during high season, which runs from November to March. These are also the coldest months of the year and the most pleasant times to visit, as temperatures soar during March, April and May. Although May to October is the rainy season, it also combines lower visitor numbers with slightly cooler temperatures and prices dip as well.

What Is There To Do On City Breaks In Bangkok?

Zoom through the city in a tuk tuk to the Khao San road. Well known by backpackers, this famous strip is bustling with street food vendors, bars and market stalls. The Banglamphu district is easily the most recognisable in the city. Be sure to get your fortune told at Golden Mount shrine, which also provides a superb view over the city. Next, weave your way through the sleepy silk-production district, Baan Khrua. Canals carve up this historic part of town, once home to the silk industry in the city. Today you can still find two family run silk shops, Phamai Baan Krua and Aood Bankrua Thai Silk, among the historic houses.

With its glittering golden throne shaped like a boat, the royal residence (known as the Grand Palace) is a popular attraction. A variety of ornate architectural styles comprise the palace buildings, blending Italian Renaissance style with traditional Thai architecture. Alternatively you can play an ancient battle game at the Museum of Siam. Interactive exhibits tell the story of the Thai people, taking you on a journey through traditional and modern Thai culture. Finish your day at the Brick Bar, a live music venue frequented predominantly by Thai locals. Be sure to grab your seat early as this popular place is usually packed.

What Is There To See On Weekends In Bangkok?

The sounds and scents of package holidays in Bangkok distinguish the city in the memory but there is plenty to see here too. Here are some of the most popular attractions:

Dining out on package holidays to Bangkok

Dine like royalty (literally) at Krua Apsorn. The Thai people are very fond of their royal family, and this cafe-style restaurant is the royals' favourite lunch spot. Try the fantastic stir-fired crab with chili or the crab omlette. If the prices here are on the hefty side for your budget, never fear, Bangkok's street food is superb, with tables lining many a pavement. Princely dining is possible for less than 150 Baht. Chow down in Chinatown, known locally as Yaowarat, where grilled seafood sings, accompanied by satay sauce, peanut butter, rice and noodles.

What To Bring Back From Package Holidays In Bangkok

As much a feature of weekends in Bangkok as any of the sights and attractions mentioned above, Chatuchak Weekend Market is a cultural phenomenon in itself. One of the world's largest markets, it is well worth spending a day here. Everything from baby squirrels to traditional crafts are sold here and there is a sizeable food market too. Or Tor Kor Market is a cornucopia of fresh Thai food in myriad forms. Make your way through the antiques, arts and crafts and old LPs in the first section, on your way to the clothing and accessories area in the eighth section. You will find every conceivable style here as well as textiles and semiprecious jewellery. Don't miss the open air gallery in the seventh section and the spices at Spice Boom. If you are in search of luxury goods head to MBK's multi-storey mall, located in the city centre.