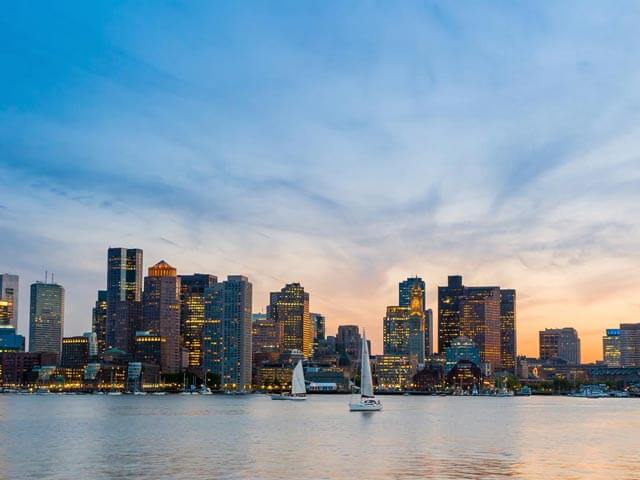 City breaks in Boston offer the opportunity to explore one of the most colourful, vibrant and fascinating cities in the United States. Overflowing with history, culture, sport and humour, Boston is warm, welcoming and rich with tradition and heritage. A Boston flight and hotel package allows you to get to know the singular character of this fabulous city which was established in 1630 making it one of the oldest cities in the USA.

What To Know Before Visiting Boston

Warm and welcoming they may be but Bostonians have a hard-won reputation for being bold and brash - a reputation they are rather proud of. So be prepared for a certain directness but don’t worry Bostonians aren’t being rude, they just like to get straight to the point.

Whether you are flying from Cork or Dublin you will arrive at Logan International Airport. A mere three miles from the centre of Boston, Logan offers excellent transport links to all areas of the city. There are a variety of bus and train options and there is even the opportunity to take a water shuttle all the way into downtown Boston. Taxis are naturally also available but do be warned that, because of the tunnel, all road traffic between the city and the airport must pay a toll which the taxi driver will add to your fare.

When Is The Best TIme To VIsit Boston?

Whatever time of the year you choose to visit you will never be short of things to see and do on Boston package holidays but the city’s infamous weather is worth bearing in mind when planning your trip. The summer months find the Boston in bloom and the temperate weather means that the city’s many outdoor attractions are a little bit more enjoyable.

Winter city breaks in Boston offer their own special rewards for those hardy enough. Boston is a famous sports town - most recently for the exploits of its football team, the New England Patriots. Having won five Super Bowls since the turn of the century, the Pats are local legends and a trip to see them during the football season (beginning in September) makes a winter visit to Boston come alive. There’s also the chance to escape the cold into one of Boston’s many justifiably famous bars!

What Is There To Do In Boston?

If the rough and tumble of American football doesn’t appeal, a great day out - whether your a sports fan or not - can be found at the legendary Fenway Park baseball stadium, home to the Boston Red Sox. Baseball is a summer game so you can enjoy a bit of sun on your neck whilst enjoying a game during your weekend in Boston. A riot of colour, tradition and Americana, Fenway is one of the most storied stadiums of any kind and a visit is a real badge of honour.

There is so much more to Boston than the infamous Tea Party but its importance to the city’s heritage cannot be overlooked. In 1773 Americans protesting English taxation dumped tons of perfectly good tea into Boston Harbour and any weekend in Boston should certainly include a visit to the Boston Tea Party Museum. Taking the whole tea theme very much to heart, this interactive attraction offers visitors the chance to chuck sacks of tea into the harbour and later enjoy a pot of the very same beverage in the tearooms.

What Are The Places To Visit in Boston?

Even a weekend in Boston can be enough to see a surprising number of the city’s many sights. For such a big city, Boston is surprisingly walkable and there is no better way to explore its attractions than by walking the Freedom Trail. Just find the red line on the sidewalk and follow it. The Freedom Trail takes in such historical sights as Bunker Hill, the Paul Revere House, the Old State House and Boston Common - the oldest city park in America.

Package holidays in Boston are a great way to get to know the city’s history and one of its most beloved and historic spots is the Old Corner Bookstore. A meeting place for such writers as Longfellow, Emerson, Hawthorne and even Charles Dickens, the building was saved from demolition in 1960 and survives today as a Mexican restaurant.

Where To Eat In Boston

What To Bring Home From Boston

Nothing says Boston like a Red Sox baseball cap. They come in all sorts of designs but the navy blue cap with the big red ‘B’ is generally considered a classic. If you forgot to pick one up on your visit to Fenway Park you will have no problem getting your hands on this Boston fashion staple in virtually any corner store.