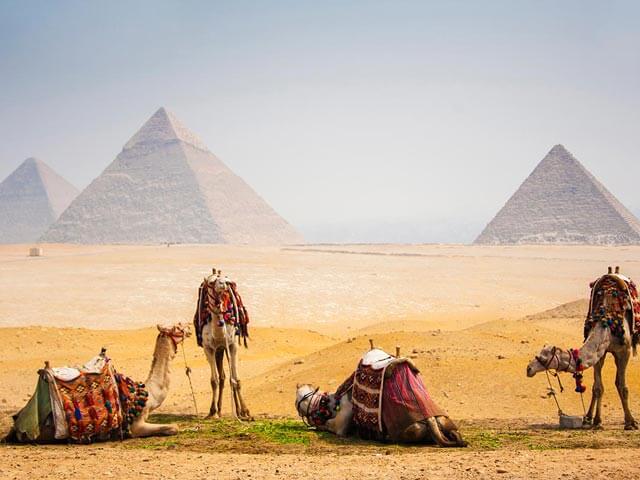 An Introduction to Cairo

Nicknamed 'the mother of the world' and 'the city of a thousand minarets', Cairo dates back to 6000 BC. The capital of Egypt and the largest city in the Arab world, it has been a much loved travel destination since the 1800s. Each year there are 16 million visitors, thanks to the growing number of flights and hotels in Cairo. With flights to Cairo, British visitors to the country grew by 74 percent in 2017. The modern city is built around the ruins of ancient Memphis which date back to 3100 B.C.E.

Modern Cairo is the seat of the first Egyptian settlement called Babylon Fort which was built around the year 150. In 642 A.D Cairo became the military headquarters of the Arab invaders. In 972 the city came under the governance of the North African Shiite Fatimid Dynasty and was renamed Al-Qahirah after the planet Mars which rose on its founding day. In the same year the Al-Azhar mosque and university were built and Cairo became the heart of Islamic learning and philosophy. After being ruled by several dynasties, the capital was modernised during Mohammed Ali's reign. Finally, it became a British protectorate until gaining independence in 1922.

Before Booking Your Flight And Hotel In Cairo

Cairo is 2 hours ahead of United Kingdom. The city's only airport, the Cairo International Airport (CAI) is located 22km from the city. Their several non-stop direct flights to Cairo linking major cities like London, Birmingham, Glasgow, Manchester and Edinburgh. A typical flight from Dublin to Cairo may last up to 8 hours with 1 stop in between. The quickest one-stop flight from Cork to Cairo airport lasts around 10 hours with some taking 30 hours depending on the stopover destination and wait which could be anywhere between 3 and 24 hours.

The official language of Egypt is Egyptian Arabic although English and French are also widely spoken and understood. For travelling in Cairo, you need to exchange your currency for the local Egyptian Pound. The exchanges in the airports may not have the best rates. Most Cairo banks or foreign exchange bureaus offer currency exchange. It is convenient to travel around with traveller's checks which can be acquired before arriving.

The Best Time For City Breaks In Cairo

The best value package holidays in Cairo are from October to March when the temperature is mild and holiday makers are few and far between. December to February is the peak season owing to the cooler weather. However, remember to book your flights and hotel a few months in advance. February and October are good times to visit for the spectacular Abu Simbel Sun Festival. The festival celebrates an auspicious solar phenomenon at the Abu Simbel temple with prayers, meditation, dance, music and food. Visitors also come during the month of Ramadan to soak in the festive atmosphere with nights of great meals with live music, entertainment and Sufi dances.

What Is Their To Do In Cairo?

With so many attractions to explore and several activities to indulge in, there is something for every traveller whether on a long and relaxing city break in or a short weekend in Cairo. Some of the best things to do in Cairo include:

Which Places Should You Visit In Cairo?

Some visitors are satisfied with a tour of the Pyramids of Giza and the Great Sphinx but there is so much more to this city. If the ancient ruins are what have drawn you to Egypt's capital, carve out some time for the archeological sites of Dahshur, Memphis and Saqqara. For a dose of Egypt's religious past, explore Salah El-Din Citadel and the historic Islamic Cairo and Coptic Cairo neighbourhoods. Further insight into Egypt's past can be gained at the Egyptian Museum. When you are in need of a break from Cairo's historic locales, relax in Al Azhar Park or barter for goods at a Khan el-Khalili bazaar. And as dusk sets in over Cairo's sandy terrain, witness the monuments glow in the orange light of the setting sun as you enjoy a felucca ride on the Nile.

What To Eat In Cairo?

No matter which attractions the package holidays of Cairo entail, no tour of the city is complete without exploring its varied cuisine. The street is the best place to begin with a sampling of a great assortment of Arabic and African traditional breads and fast foods which include local favourites such as kofta kebabs (Middle Eastern meatballs), mombar mahshy (rice stuffed sausages), shawarma (meat stuffed Arabic bread) and Mihallabiya, a famous Egyptian milk pudding. With so many wonderful places to eat and delicacies to taste, a weekend in Cairo can be dedicated solely to sampling the local specialities.

What To Bring Home From Cairo?

Haggling in the souks is the traditional way of shopping in Cairo. Look out for painted papyrus scrolls, copper and bronze jewellery and housewares, carpets, leather bags, belts and jackets and Egyptian cotton. For the patient haggler, the souks at Khan al-Khalili offer the best in gold, silver and gemstone ornaments and beautiful tobacco water pipes called shisha any of which would make the perfect souvenir of city breaks in Cairo.