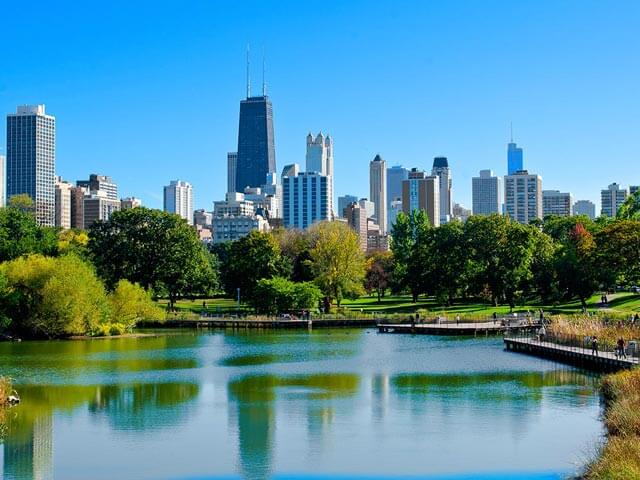 An Introduction to the Windy City

Situated on the shores of Lake Michigan, one of the Great Lakes, Chicago is the third-largest city in the U.S. and is a bustling metropolis to rival many other iconic destinations. Notable attractions include the Willis Tower, Millennium Park, and the legendary sports venue Wrigley Field. However, those who explore the city beyond these principal landmarks will discover a city bursting with craft beer pubs, family-run restaurants, and a vibrant cultural heritage.

A flight and hotel for Chicago offer a wonderful opportunity to experience an authentic American destination. Explore the city's history at the Chicago Museum, dine on delicious deep dish Chicago-style pizza, and head to an upmarket cocktail bar or bohemian dive, to complete your evenings.

What to Know Before Visiting Chicago

If you're travelling on package holidays to Chicago then it's probable that you'll arrive at O'Hare International Airport. This is Chicago's main airport and is the arrival destination of flights from Dublin to Chicago or Cork to Chicago, for example. There is a smaller secondary airport called Midway which is used for a minimal number of flights to Chicago. Visitors to the United States need to apply for an electronic visa waiver, the ESTA, at least 72 hours before travelling. The process can be completed online and is typically fairly quick, but don't wait until the last minute.

The local currency is the U.S. dollar, of course. English is the most widely spoken language in the city, which is five hours behind the UK.

When Is the Best Time to Visit Chicago?

Spring and autumn are great seasons for package holidays in Chicago. Temperatures are usually pleasantly warm without being hot, and the Windy City is awash with festivals. Many neighbourhoods hold spring celebrations. The city's beloved Jazz Festival is held annually at the very end of August or beginning of September.

Christmas is another calendar highlight and a fantastic time for a weekend in Chicago. The city sparkles in thousands of fairy lights, with squares and plazas transformed into bastions of festive cheer. That said, winter in the city can be quite cold, with average daily temperatures in December through February around -3°C to -6°C.

What Is There to Do in Chicago?

There's an abundance of things to see and do on a weekend in Chicago. The city's Millennium Park is an excellent place to start. Its regular concerts and art installations make the park a destination in its own right, as well as the perfect spot for a picnic on a warm afternoon. The Art Institute of Chicago is famous for being guarded by iconic bronze lions, but it's the excellent collection within that makes this a top attraction. It houses Grant Wood's well-known work 'American Gothic', among other notable pieces.

Wrigley Field is home to the Cubs, but even when there isn't a baseball game on, there's plenty to see at the stadium – sports fans will love tours of this legendary American sports venue. Eager shoppers should head to Chicago's so-called magnificent mile, located off North Michigan Avenue, where you can find stores selling everything from books to boots.

What Places Should Be Visited In Chicago?

City breaks in Chicago aren't complete without a trip to see the magnificent Willis Tower, which has been towering over the skyline since 1973. Observe it from the ground, or take the lift to the 103rd floor and marvel at the view offered by America's second-highest observation deck. Other city highlights include:

What to Eat In Chicago

Deep dish pizza is a Chicago staple and simply a must-have when you visit the city. These colossal slices are best devoured with a cold beer. One place that doesn't disappoint is Pequod’s Pizza in Lincoln Park. Like most American cities, Chicago also knows how to serve up a fantastic steak. David Burke's Primehouse and its 28-day aged-in-house ribeye is a real treat for any red meat lover.

Head to Superdawg for a quick hot dog at lunchtime and have a dog the Chicago way, that is, without ketchup. A few other favourites among the locals include a succulent Italian beef sandwich from Portillo's and for dessert, a rainbow ice cream at the Rainbow Cone.

What to Bring Home From Chicago

There are plenty of gifts and souvenirs to bring home from city breaks in Chicago. At the Spice House, you can pick up local spice mixes tailored to different Chicago neighbourhoods. In Lincoln Park you'll find Berco's Popcorn, a city favourite. And at Chitown Clothing, you can pick up an array of city-themed shirts, hats, and more.