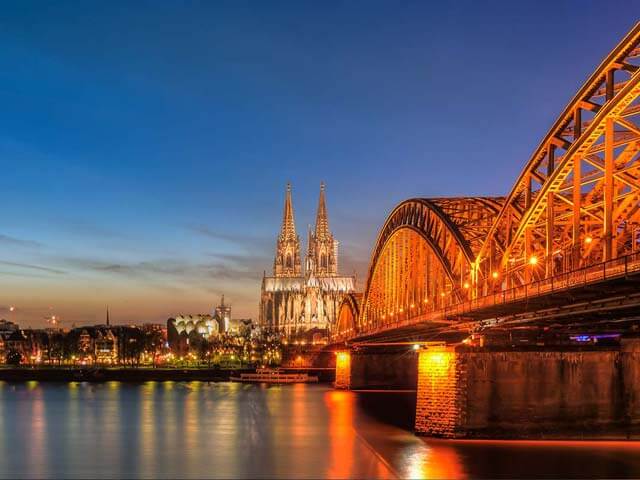 An Introduction To Cologne

Located on the banks of the River Rhine in Germany, Cologne is one of the country's largest and most important cities and is famed for its open, welcoming and liberal attitudes. With a flight and hotel in Cologne, you too can experience the city's unique and vibrant culture and culturally distinctive flavour. Its museums are world-famous, hosting everything from Warhol to Romantic-era collections and the cathedral, which dominates the skyline, is one of Germany's most impressive icons. Relax in the riverside parks, dine on traditional German food and slip into the cosmopolitan nightlife of Cologne when you head to Germany's most fantastic destination.

What To Know Before Visiting Cologne?

Cologne is served by a well-equipped international airport which is the arrival point for most visitors who book a flight and hotel in Cologne. The airport is connected to the city by the local S-Bahn railway which is, without question, the cheapest and most efficient way to reach the centre. While English isn't widely spoken, those working in tourist industries will be fluent ebut a few words of German will go a long way with the locals. The currency is the Euro and Germany is one hour ahead of the United Kingdom (GMT+1).

When Is The Best Time To Visit Cologne?

There is no bad time to for a weekend in Cologne. However, to enjoy the best of the riverside bars and alfresco dining in the historic old town the summer reigns supreme. Between May and September temperatures in Cologne regularly reach the mid-twenties which is perfect weather for sightseeing. The city comes alive one again over during carnival in February and for the festive period when the city is adorned with Christmas lights and hosts traditional Christmas markets - a wonderful time for a flight to Cologne.

What To Do On City Breaks In Cologne?

A guided walked tour is a fantastic way to orientate yourself in the city and there are free daily tours organised by the tourism board which will highlight the best of what to see on package holidays in Cologne. The city's zoo is one of the oldest in the world and was founded in 1860. The gargantuan elephant park is the star of the show and you can easily spend an entire afternoon there. Cologne has a wonderful nightlife scene for all tastes – including one of the world's largest collection of LGBT venues and bars. Don't miss your chance to see the city from a different perspective and take a cruise up the Rhine River to see the eclectic skyline from the water.

What Places To Visit In Cologne?

The cathedral is the city's most famous attraction and is a must when you spend a weekend in Cologne. There are also a total of twelve Romanesque churches peppered around the city which you will likely stumble across as you explore the Medieval old town with its cobbled streets and historic buildings. Make a stop in the neighbourhood quarter of Agnesviertel – famed for its independent bookshops, boutique shops and cafes. On a sunny day head to the Rheinpark on the banks of the river and spend the afternoon people watching and picnicking with the locals. When you book city breaks in Cologne you should spend some time exploring the city's world-class museums. Cologne is noted for having some of the best collections in the world and some of the best can be found at:

What To Eat In Cologne?

German cuisine has an undeservedly poor reputation but there are plenty of local dishes you should try on package holidays in Cologne. Weiner schnitzel and roast pork knuckle are delights well worth sampling when you book a flight from Dublin to Cologne. Some lesser known but equally delicious German specialities include Mettbrütche (bread with minced pork) and Reibekuchen (potato pancakes).

What To Bring From Cologne?

A bottle of Kölsch, the locally brewed beer, is the ideal gift for those who enjoy a tipple. Sünner Gin is another delicious beverage to take home. Cathedral shaped waffles can be bought from the gift shop which are cute and great for all the family and if you are visiting over Christmas be sure to pick up a trinket or two from the market in the old town with a flight from Cork to Cologne.