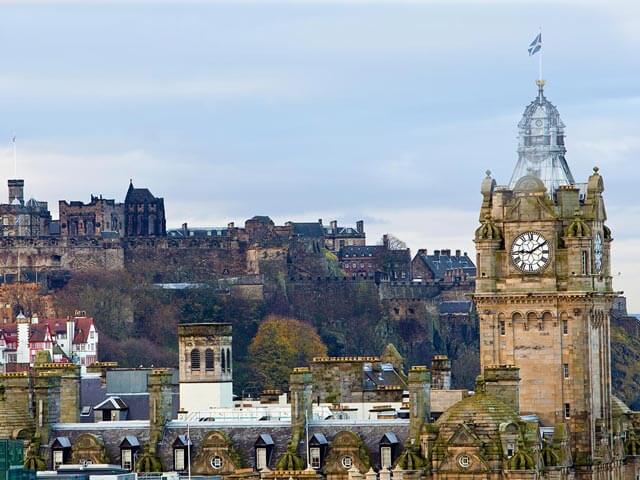 The capital of Scotland since the mid-1400s, Edinburgh is a city packed with history, culture and great pubs and restaurants. Whether you want to spend your weekend in Edinburgh stepping back in time, experiencing art from around the world or trying some unusual local culinary delicacies, city breaks in Edinburgh offer something for everyone.

What to know before visiting Edinburgh

Edinburgh Airport (EDI), west of the city, is connected with the centre via a regular tram service, which takes around 30 minutes. Alternatively, opt for cheaper bus journey, which takes a little longer to get to Edinburgh's main thoroughfare, Princes Street. Flights to Edinburgh arrive from all over the world, including Cork and Dublin.

English is the main language, though it will of course be spoken with a Scottish accent in the Scottish capital! The currency is the pound, and Edinburgh is in the same timezone as London.

When is the best time to visit Edinburgh?

Most visitors head to Edinburgh during the summer months, when the world's largest arts festival, the Edinburgh Fringe, takes place alongside the more highbrow Edinburgh International Arts Festival. Hundreds of groups perform comedy, theatre, dance and music at venues across Edinburgh, and the city's oldest street, the Royal Mile, becomes an open-air performance space.

Whereas winter package holidays in Edinburgh are almost guaranteed to be chilly and wet, Edinburgh's Christmas and New Year celebrations will warm you up. New Year, or Hogmanay as it is known locally, is the biggest party of the year, with thousands of people heading to Princes Street to watch an enormous fireworks display from Edinburgh Castle to ring in the New Year.

What to do in Edinburgh

There are plenty of activities to choose from when you opt for a flight to and hotel for the weekend in Edinburgh:

Edinburgh Castle, which dominates the city centre, is well worth a visit. Make sure to also see the Palace of Holyroodhouse at the bottom of the Royal Mile, the Queen's residence during city breaks in Edinburgh. Opposite the Palace is the new Scottish Parliament building, which is open to visitors for guided tours.

Head down to Leith, where you can experience the opulence of the Britannia, the former royal yacht. If you're lucky with the weather, Edinburgh's Botanic Gardens are also worth exploring. Art lovers will enjoy the National Galleries on The Mound, or the Modern Art Gallery in the stylish Stockbridge area of the city.

What to eat in Edinburgh

Traditional Scottish dishes such as cullen skink, a type of fish soup, and of course haggis, spiced meat stuffed into the lining of a sheep's stomach, are widely available and worth trying if you want to experience typical Scottish cuisine on package holidays in Edinburgh. Although Scotland may be famous for its whisky, Edinburgh is fast making a name for itself as a centre for gin and craft beer production – make sure to try some local brew.

What souvenirs can you bring home from Edinburgh?

A bottle of whisky, a bottle of local gin, or a few cans of Scotland's favourite soft drink, Irn Bru, makes a great gift for family and friends. While tartan souvenirs are ten-a-penny in shops on the Royal Mile, if you want to stand out from the crowd back home, you could always invest a few hundred pounds in your very own kilt.

Visitors with a sweet tooth will be spoilt for choice in Edinburgh. Try Edinburgh Castle Rock, a locally made confectionery, softer than traditional rock, or tablet, a harder type of fudge. And of course, traditional Scottish shortbread is a mandatory present for loved ones when you return from Scotland..