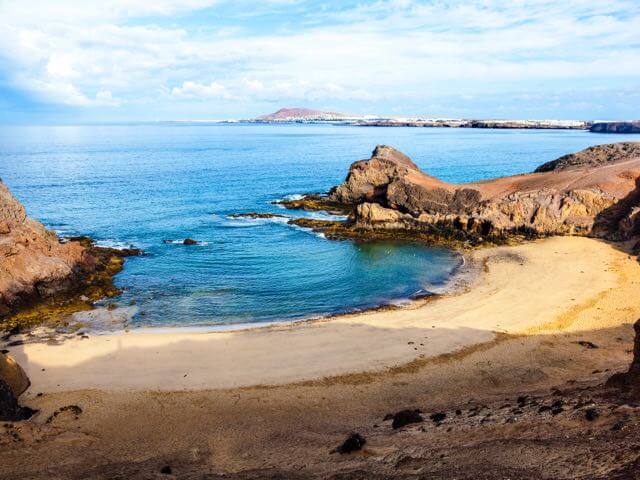 UNESCO-listed nature reserves, fascinating geology and azure waters are just some of the attractions of Lanzarote, one of Europe's most exotic-feeling destinations. Palms wave their fronds atop black lava fields, while families frolic on the island's superb beaches.

From dining inside an ancient lava bubble to travelling back to the island's pirate-worried past, Lanzarote's attractions far exceed your straightforward, sun-sand holiday – although there are plenty of beaches on offer here, too. Dip your toes in the storied past of this island, rich both in flavour and unforgettable mystique.

Before booking a flight to and hotel in Lanzarote

Flights to and hotels in Lanzarote couldn't be easier to organise from the UK. Flights from Cork to Lanzarote run frequently, as do flights from Dublin. The euro is the currency on the island, and although the native language is Spanish, almost everyone you'll encounter is likely to have superb English skills. There's also no time difference between Lanzarote and the UK, so you can glide into your weekend with ease. Connections between the airport and the island's resort towns are reliable and inexpensive.

When is the best time for weekends in Lanzarote?

It's always a good time to visit Lanzarote to enjoy its balmy weather and spectacular scenery. Especially popular is the island's Carnival in February or March, which features processions, live music and a festive atmosphere. Día de San Ginés, another magical time to visit the island, includes celebrations that are almost unavoidable, wherever you may be. Peak periods are Easter, July and December. Whenever you visit, you'll be dwarfed by the majestic UNESCO-protected scenery.

What is there to do on city breaks in Lanzarote?

What is there to see on weekends in Lanzarote?

With a surreal landscape, Lanzarote is visually spectacular. Here are the Instagram-worthy highlights of package holidays in Lanzarote:

A package tour to Lanzarote would be missing something without paying homage to the island's distinctive cuisine. Dig into caldo de pescado y gofio escaldado, a traditional fish stew enriched with vegetables and maize. Seafood sizzles on the volcano-heated grills at El Diablo Restaurant atop the mountain at Timanfaya National Park. Alternatively, dine out in the unparalleled ambience under the black rock dome inhabited by Casa Museo del Campesino. Unsure what to order? Try tortilla conejera (fish and onion omelette), or sancocho (fish with sweet potatoes). Local Malvasian wines benefit from the fertile volcanic soil and are considered some of the best in the world.

What to bring back from Lanzarote

Souvenir hunting starts at Marina Rubicón's and Playa Blanca's markets, which are held every Wednesday and Saturday. Teguise's Sunday market features clothes, jewellery and toys to take home. Pick up a bottle of the island's speciality mojo sauce, or gourmet olive oil. For something even more special, visit local artist Oscar Gonzales's market stall, Galeria OE, where products range from paintings to pottery and even fridge magnets.