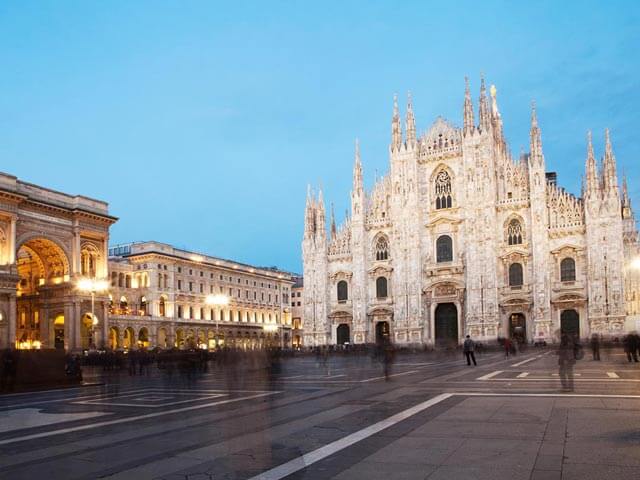 Discover the Exciting City of Milan

Located in Nothern Italy, in the foothills of the Alps, Milan is one the country's biggest cities with a population of over 1.3 million people. Capital of the Italian province of Lombardy, Milan is known for its world-famous opera house, fine food and two championship-winning football teams. Whether you're interested in culture or calcio, a weekend in Milan is a great option for a holiday.

What to Know Before Visiting Milan?

The city is served by three airports, giving travellers plenty of options when it comes to booking a flight to and hotel in Milan. Milan Malpensa, the main airport for international and long-haul flights, is located in the north-east suburbs and connects to the city centre by the Malpensa Express train service. The smaller Linate airport is for domestic and some European flights, while some airlines fly to Bergamo Airport, which is located in Milan's north-west suburbs. Both are connected to the city centre by a shuttle bus service.

Flights to Milan arrive from all over the world, and there are frequent flights from Cork to Milan and from Dublin to Milan every week. The main language is Italian, the currency is the Euro. The time zone in Milan is one hour ahead of the UK.

When is the Best Time to Visit Milan?

Summer months in Milan are mild and sunny, though the temperature drops when autumn rolls around. If you're a fan of winter sports, winter package holidays in Milan allow you to visit the ski resorts in the mountains north of the city.

Milan is known as one of the most fashionable cities in the world, and hosts the prestigious Milan Fashion Week twice a year in February and September. If you love fashion, city breaks in Milan during Fashion Week will certainly inspire you.

What to do in Milan?

The San Siro stadium is home to both AC Milan and Inter; the two teams alternate home games, with a live fixture every weekend between August and May. Even if you can't get a ticket while on your weekend in Milan, you can still enjoy a tour of the iconic stadium.

Head to the hills to enjoy the amazing mountain scenery north of Milan. In the summer, these foothills are ideal for hikers, while in the winter, the ski slopes of Bergamo and Como are only an hour's drive from the city centre, more than close enough to hit the slopes while enjoying a weekend in Milan.

Fashionistas will love the high-end boutiques in Milan, especially along the Via Montenapoleone and Corso Venezia, where the designer stores are located. Even if you can't afford the high prices, you can still enjoy window shopping.

What Places to Visit in Milan?

Tear yourself away from the designer boutiques and enjoy Milan's cultural and historical attractions:

What to Eat in Milan?

You cannot go wrong with pizza and pasta in Italy, but Milan does have some culinary specialities. Coloured with saffron, risotto alla Milanese is not just a feast for the eyes, but also for the palate, while ossobuco, a beef or veal steak served on the bone, is a delicious tender way to eat meat. Make sure to try some of the local Lombardy wine when you dine out on package holidays in Milan.

What to Bring Back from Milan?

Wine also makes a great souvenir of city breaks in Milan, or you can bring back some fine Italian coffee if you prefer. Splash the cash on designer clothes or a designer bag from one of the best Italian fashion houses, or pick up an AC Milan or Inter football shirt when you visit the San Siro.