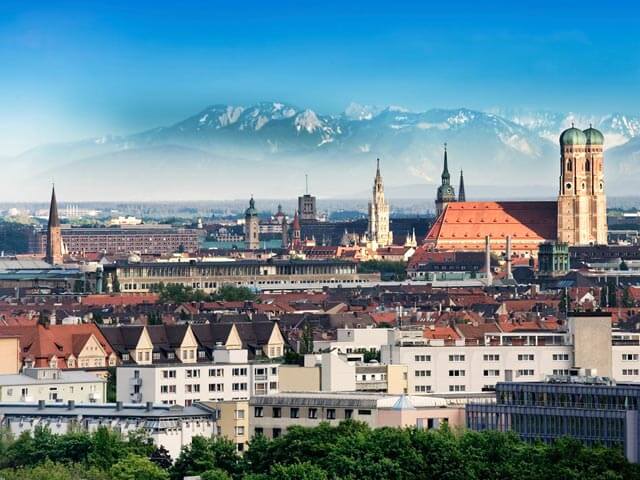 Capital of the German state of Bavaria, Munich is located in the south of the country, not far from the border with Austria. The city has enjoyed a rich history and cultural life, which visitors will enjoy exploring, while the surrounding region is famous for its excellent beer and meaty delicacies. The third largest city in Germany, Munich is home to 6 million people, as well as the country's most successful and famous football team, Bayern Munich.

What to Know Before Visiting Munich?

German is the main language in Munich, although you may hear some older people speaking the local Bavarian dialect. Most locals will be able to speak a little English. The currency is the Euro and the time in Munich is one hour ahead of GMT.

When it comes to booking a flight to and hotel in Munich, flights to Munich arrive from all over the world at the city's main airport about 18 miles north of the city centre. Regular flights from Dublin to Munich and flights from Cork to Munich depart throughout the year. Upon arrival, you can use the city's excellent S-Bahn train system to travel into the centre of Munich from the airport, with journeys taking about 45 minutes.

When is the Best Time to Visit Munich?

Summers in Munich can be very warm and sunny, but the city's proximity to the Alps means that weekend breaks in Munich in the winters months can easily be very cold. Of course, if you want to take advantage of the great winter sports destinations in the Bavarian Alps, then winter and early spring is definitely the best time to book package holidays in Munich!

The city is famous for its Oktoberfest festival, which actually takes place in September each year, and attracts thousands of visitors to take city breaks in Munich. Oktoberfest is the largest beer festival in the world, with local bars setting up huge beer tents and tables outside where you can enjoy German beers, delicious snacks, and traditional Bavarian music.

What to do in Munich?

Even if you are visiting the city at a different time of the year, you can still enjoy the local beer culture on your weekend in Munich. The old town is home to lots of traditional brauhaus or breweries, where you can sup on a huge stein of beer while eating bratwurst or weisswürste sausages, enjoying a performance by a local oompah band.

Located close to the Bavarian Alps, Munich is an ideal destination for visitors who enjoy the great outdoors. In the summer, you are only a short drive from Alpine lakes where you can swim and enjoy watersports, and mountains criss-crossed with hiking and biking trails. In the winter months, those hiking trails become ski slopes, and there are some popular ski resorts within an hour's drive of the city, including Oberaudorf and Schliersee.

What Places to Visit in Munich?

Don't spend all your time in the brauhaus or on the slopes, however. There is much more to visitors to enjoy on package holidays in Munich!

What to Eat in Munich?

Munich's bars and restaurants may be well known for their beer and sausages, but there is much more to Bavarian cuisine than bar snacks. While dining out, look for caramelised pork chops on the menu; this local delicacy is usually served with bread dumplings and pickled red cabbage, or sauerkraut, which is itself a favourite dish in Munich.

If you have a sweet tooth, there are no shortage of dessert options and sugary snacks on offer in Munich. Germknödel, a dessert which originates in nearby Austria but which has become a firm Bavarian favourite, is a huge steamed dumpling filled with plum sauce and served with hot vanilla custard.

If you fancy coffee and cake on an afternoon, try local speciality Prinzregententorte (Prince Regent Cake) which consists of several thin layers of sponge, interspersed with chocolate and topped with jam and a smooth chocolate glaze. Luxurious and decadent!

What to Bring Back from Munich?

Beer might be an obvious choice, but friends and family will be delighted to receive some authentic Bavarian brew as a souvenir of your visit to Munich. Similarly, there are lots of places where you can buy traditional beer steins, either to take home as a decoration for your home or from which to drink your new favourite beers.

If beer isn't your drink, then a bottle of esiwein (or ice wine) is another great option. This sweet wine is made from frozen grapes, and has to be kept at very low temperatures which makes transporting it home a little tricky! Take home a piece of the local culture in the form of a Bavarian flag or a set of lederhosen, the traditional outfits worn by ordinary Bavarians for local festivals.