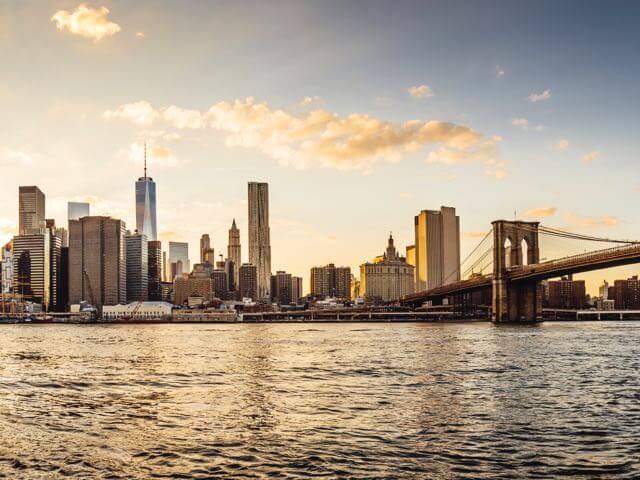 As one of the world’s most iconic cities, New York is a must-visit destination for passionate travellers. City breaks in New York offer any sort of entertainment you might desire, from world-class museums, famous landmarks, nightlife, and a truly international myriad of cuisines. Schedule your flight and hotel for New York and get ready to hit the pavement.

First colonised with explorer Henry Hudson's 1609 landing, present-day Manhattan was a capital of New Netherland until the city was captured by the British army in 1664 and named New York, in honour of the Duke of York. Fast forwarding to the completion of the first skyscraper in 1902, the city's expansion and development was rapid. The Empire State Building and Chrysler Building, still icons today, were both completed in 1931. Presently, with over 60 million annual visitors, New York is clearly a premiere destination.

New York: Know Before You Go

Fly to New York and you’ll land at one of three international airports. Most international flights come into JFK, and if you’re taking a flight from Dublin to New York or a flight from Cork to New York, for example, this is probably where you’ll land. La Guardia Airport mainly handles domestic flights, while Newark International Airport in nearby New Jersey is served by both domestic and international flights. Visitors from many European countries including the UK and Portugal, as well as other countries such as New Zealand, don’t need a visa to enter the US for 90 days or fewer. However, all international visitors will need to file an online ESTA, or visa waiver, which can be done directly from the US government’s webpage. The ESTA should be filed at least 72 hours before your date of departure, and travellers are advised to do so even earlier.

When to take a weekend in New York will depend on what you want to do there. For a glittering Christmas with a good possibility of snow, travel in December. If you'd like to take part in an American tradition, you might consider a November visit, over Thanksgiving, in time for the Macy’s Thanksgiving Day Parade. Spring brings temperate though occasionally wet weather, while early to mid-autumn can be both temperate and golden (or wet). June through August are hot but popular nonetheless. Expect both high temperatures and humidity at this time.

What Is There to Do in New York?

City breaks in New York yield much to do, but perhaps the best advice is to simply relax and let the city carry on around you. Even those spending the weekend in New York will leave feeling as though they’ve done enough for two weeks. Here are some ideas:

What Places Must I Visit in New York?

Take a flight and hotel for New York and you might feel as though you’ve landed on another planet. There are so many places to visit, how to decide where to go first? Here are some ideas:

Where to Eat in New York

Package holidays in New York leave most visitors quite satiated. Head to Chinatown in either downtown Manhattan or downtown Flushing for steaming noodles and dim sum. There are also Koreatowns in both Manhattan and Queens. Speaking of Queens, Astoria offers an array of cuisines from around the world, including Greece, Thailand, and Mexico. Back in Manhattan, Harlem is known for its soul food. For a leisurely weekend brunch, head to the West Village, or to Carroll Gardens, Boerum Hill, or Park Slope, all neighbourhoods in Brooklyn.

As a shopping destination, New York is second to none. Those with an eye for high-end fashion will want to head to Fifth Avenue's midtown stretch, where you'll find brands like Tiffany & Co. and Louis Vuitton, as well as the iconic Bergdorf Goodman and Saks Fifth Avenue department stores. To buy unique gifts, check out boutiques on the Lower East Side, in the East Village, or in Williamsburg, in Brooklyn.