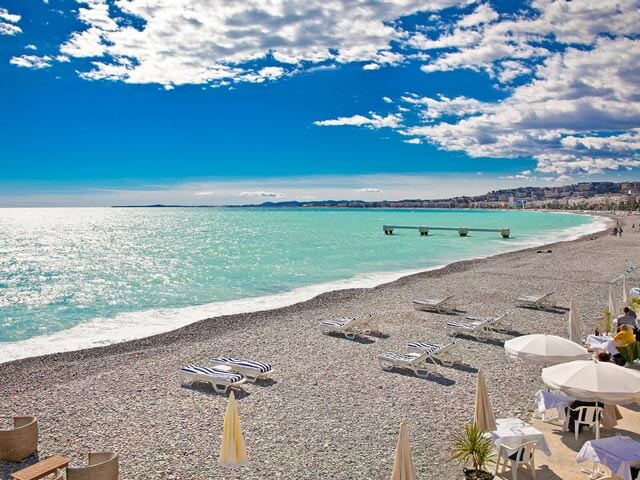 An Introduction to Nice

Located on the south coast of France, Nice is the largest city on the French Riviera and one of the most popular visitor destinations in the country, thanks to its mix of beaches, museums, and historical and cultural sights. Situated between Cannes and Monaco, package holidays in Nice are also ideal for exploring the other exclusive and fashionable resorts along the Cote d'Azur.

What to Know Before Visiting Nice

The main language in Nice is French, the currency is the Euro, and the time zone in the city is one hour ahead of the UK.

Flights to Nice arrive into the city's airport, located a few miles south of the centre, with a runway which actually stretches out into the Mediterranean! Flights from Dublin to Nice and from Cork to Nice arrive each week, and a regular bus service takes you from the airport to the city centre.

When Is the Best Time to Visit Nice?

Summer city breaks in Nice are hot and sunny— more than warm enough to enjoy a dip in the Mediterranean. In the winter, temperatures tend to stay between 10°C and 20°C, with more rain, as well.

Bastille Day, July 14th, is the best time to visit any city in France, but a weekend in Nice is particularly spectacular, with celebrations featuring street performances and a fireworks display. The Carnaval de Nice, held every February and March, ends with a spectacular parade of flower-covered floats and the burial of the Carnival King on the famous Promenade des Anglais.

What Is There to do in Nice?

Promenade des Anglais, the long walkway which follows the coastline for almost five miles, from the airport to Quai des États-Unis, is a great place for a stroll, day or night. On summer evenings, you can enjoy street performers or shop at stalls selling local crafts.

Package holidays in Nice are a great opportunity to enjoy some rest and relaxation on the city's beaches. Beau Rivage is one of the most popular beaches, and a great place to try out water sports, while the smaller Coco Beach, accessed by a set of stairs from the Promenade des Anglais, is a perfect swimming spot. If you enjoy lively bars and clubs, head to Florida Plage, where you can enjoy the sun by day, and party by night on your weekend in Nice.

What Places Should I Visit in Nice?

Make sure you spend some time on city breaks in Nice exploring the city's old town and its cultural attractions.

What to Eat in Nice

French cuisine is famous around the world, but there are some local specialities that you should make sure you try while on city breaks in Nice. Salade Niçoise is named after the city itself, and usually includes hard-boiled eggs, tuna, and anchovies served with olive oil. If you want to eat your Salade Niçoise on the move, order a Pan Bagnat, which consists of the same ingredients stuffed into a delicious baguette.

Ratatouille also originated in Nice; the popular French dish features a mixture of vegetables served in a tomato sauce with plenty of herbs. Finally, snack on socca, a crispy chickpea pancake served warm, and the essential Nice street food.

What to Bring Back from Nice

A bottle of Provençal wine makes a great gift or souvenir of your weekend in Nice, along with the locally-made soaps scented with lavender grown in the hills of Provence. Farms in the area still make delicious olive oil in the same way they have for centuries, while the nearby town of Grasse is famous for its innovative perfumeries, which use Provençal flowers and herbs to create unique scents.