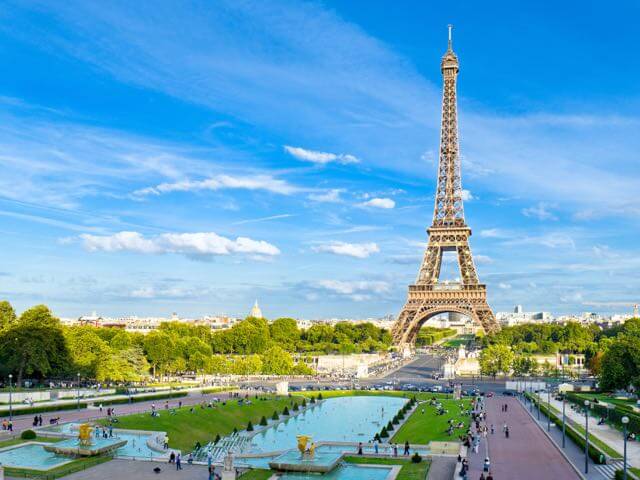 Paris, the City of Light

Iconic Paris, France's capital and largest city, is divided into twenty arrondissements, or districts, which increase in number in a clockwise direction. Depending in which one you find yourself, you'll discover elegant boulevards, quaint cobbled streets, or hidden alleyways brimming with bohemian charm. Beloved for its myriad museums, distinctive Hausmannian architecture, and of course, the Eiffel Tower, a weekend in Paris offers so much more. While it retains its classic charm, the city is also incredibly cosmopolitan, with chic bars, international restaurants, and enough galleries to satisfy even the most prolific art lover. The Louvre and Eiffel Tower are just the beginning with your flight and hotel for Paris, simultaneously one of the world's most elegant and bohemian cities.

What to Know Before Visiting Paris

A weekend in Paris requires no formal prior arrangements for those travelling on a European passport; simply hop on a flight from Dublin to Paris, or the like, and start exploring this perennially romantic city. The local currency is the Euro and most shops accept all major credit and debit cards (smaller restaurants and bars might require cash). Paris is served by two airports, with most flights arriving at the larger of the two, Charles De Gaulle, though it's possible that your flight from Cork to Paris or from other regional airports will land at Orly, the smaller of the two, located to the southwest of the city. The local time in France is one hour ahead of the United Kingdom.

When Is the Best Time to Visit Paris?

The best time to plan package holidays in Paris largely depends on personal climate preferences. Spring and autumn boast warm, but not hot, conditions and fewer crowds than the height of summer. However, basking on the banks of the Seine River and devouring a crusty French loaf and a bottle of local wine in the August sun, when much of the local population goes on holiday, is simply divine. Winter is the quietest and most economical time for city breaks in Paris. From October to February, the world-famous museums can be explored with much smaller crowds, while the lights of the local Christmas markets are quite festive.

What to Do in Paris

Once you've got a flight and hotel all set for Paris, prepare to explore exceptional museums, as well as some of the city's iconic neighbourhoods.

What Places Should I Visit In Paris?

Away from the Eiffel Tower and the imposing glass pyramid of the Louvre, there is much to explore on package holidays in Paris. The 13th century Notre-Dame de Paris cathedral is free to visit and is simply a must (try to go early, to beat the queues). The small island, Île de la Cité, where it is located also makes for a worthwhile stroll. The Luxembourg Gardens are home to an opulent display of 17th century design and make the perfect picnic spot on a summer's afternoon. For this, the banks of the Seine are another local favourite. The attractions and sights of the City of Light are seemingly endless, but a few other highlights to try and catch on city breaks in Paris include:

What to Eat in Paris?

France is renowned the world over for its culinary delights. City breaks in Paris should be spent taking in as many of the city's best dishes as possible. Breakfast at a local patisserie is a must. You don't have to choose anywhere upmarket, even the most austere of local bakeries will serve up delicious freshly baked croissants and pains au chocolat with freshly brewed coffee. Classic French dishes such as escargots, steak frites, steak tartare, and oysters are, of course, wonderful. Look for classic bistros to try these, keeping in mind that Paris is also home to excellent international restaurants which shouldn't be disregarded.

A flight to Paris is as much about the desserts as the savories. Favourites among locals and travellers alike include crème brûlée and macarons. Don't forget to pick up a box of fine French chocolates to take home.

What to Bring Home From Paris

For fans of gastronomy, macarons, chocolate, cheese, or wine and Champagne are ideal purchases. If you're not sure which wine to buy, simply pop into a neighbourhood shop and ask for a recommendation. As you stroll along the banks of the river, you'll likely discover the Bouquinistes of Paris. These small, green boxes have become an icon of the city and sell posters, books, and postcards. You might have to rummage a little, but the feeling of finding that fantastic and unique present is more than worth the effort.