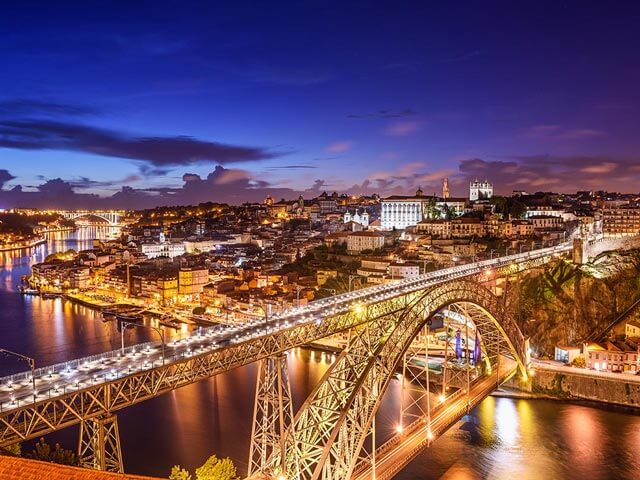 Garlanded by medieval lanes that look out on the cerulean Atlantic, Porto is perhaps Portugal's most culturally stimulating city – it's no wonder it was named the European Capital of Culture in 2001. From its iconic contemporary concert hall to its glittering Baroque cathedrals, the city's sights enrapture visitors on package holidays in Porto. City breaks in Porto also provide visitors with a plethora of food markets brimming with local delicacies. Sip the rich port produced in the surrounding hills as you sit on one of the many terraces. Stroll the city's botanical gardens or be inspired by its sacred artworks. Porto proffers a cornucopia of cultural delights, from symphonic concerts to medieval streets, ideal for parking yourself with some port in the setting sun.

It couldn't be easier to organise a flight to and hotel in Porto. Flights from Cork to Porto depart regularly, and you can also catch a flight from Dublin. The euro is the currency, and English is widely spoken alongside Portuguese. There is no time difference between Portugal and the UK. The transport links between the city and its airport are good, so it couldn't be easier to touch down in Porto and be sampling local wine by lunchtime.

When is the best time for package holidays to Porto?

April and May are favourable months to visit Porto, since the temperatures seem to exceed the visitor numbers. High season runs between June and August, when the temperatures top out. Winter is rarely cold, but frequently rainy. Weekends in Porto during the winter months can also be windy, so be sure to pack a jacket and umbrella if visiting during this period. The city is magical at Christmas and a romantic destination for Valentine's Day.

What is there to do in Porto?

Marvel at the Serralves Villa on weekends in Porto. Immaculate gardens accompany this gem of a collection, which brings together a permanent collection of old masters with edgy, contemporary shows. Listen to classical and contemporary musicians at the Casa da Musica. Imagined by Dutch architect Rem Koolhaas, the trapezoid structure has exceptional acoustics and is the centre of the city's happening cultural scene.

Travel back centuries at Sé Cathedral, which rises from a warren of medieval alleyways festooned around a vaunting hill. Although the structure was updated in the 18th century, a 14th-century Gothic cloister remains. Cross the Ponte de Dom Luis I, which dates to 1886 and bears both pedestrian traffic and the city's metro. The bridge replaced a less substantial construct that was toppled by Napoleon in 1809.

What is there to see on city breaks in Porto?

Getting portly in Porto

With luscious seafood provided by the Atlantic and the Douro vineyards to the east, Porto is blessed with plenty of flavours. Try the smoked meats and cheeses from Trás-os-Montes at the Mercado do Bolhão. This atmospheric market space dates to the 19th century. You can also nibble on sardines and superb pastries. Weekends in Porto would be lacking without a francesinha, an open sandwich featuring garlic-infused smokey sausage, cheese and egg. Try Café Santiago's version.

Travel back in time in nearby Afurada, where the fishermen haul in your lunch, practically still flipping, to your plate. Taberna São Pedro is an excellent option. Naturally, port is important in Porto's culinary landscape. Take a tour of the 18th-century Espaço Porto Cruz before enjoying a tasting session on the terrace overlooking the river.

Postcards and souvenirs from Porto

Pick up a prized tome at the remarkable Livraria Lello bookshop. More than a century old, this delightful neo-Gothic space looks like it may have inspired one of the Harry Potter books. Edible souvenirs are best sought at the Mercado Bom Successo, which also offers exciting live music and demonstrations. The market dates to the 1940s, and its elegant curvature makes an elegant spot to shop for honey, gourmet olive oil and tangy cheeses.