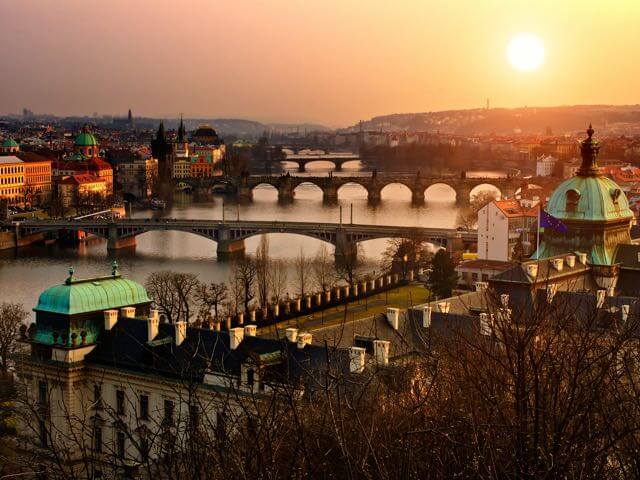 History stretching back a millennium, Europe's best beer and exquisite architecture are just some of the features of package holidays in Prague. Art Nouveau treasures, artistic masterpieces and curious artefacts await you in this ancient and intriguing European city.

With one of Europe's largest classical music festivals and Christmas markets to cheer the Scroogiest of visitors, Prague is packed with culture year round. Its restaurants and cafés also happen to serve enough goulash soup and sophisticated pastries to satisfy the most gluttonous gastronomer. Yet there's still more to pique your appetite for Prague.

What to know before booking flights and hotels in Prague

Flights to Prague run regularly from the UK, and the time difference is just an hour. You can catch a direct flight from Dublin or Cork to Prague. Once you've booked your Prague flight and hotel, you'll need to buy some Czech korunas, which are the main currency. Even if you don't speak Czech, you likely won't encounter a language barrier, as English and German are also spoken widely.

When is the best time for city breaks to Prague?

July and August are the warmest months for city breaks in Prague, which can get cold in winter. Despite the low temperatures, however, the city's Christmas markets are some of the prettiest in Europe. Spring's classical music festival is also a popular time for package holidays in Prague.

What is there to do on weekends in Prague?

Bill Murray famously travelled from Berlin to Prague for the night to see the city's famous astronomic clock in action. Dating from 1410, an animated skeleton still strikes a bell every hour, and attendant figures shake their heads, signalling their reticence to leave this mortal coil. Make the most of your time in the city, and make sure to do the following:

What is there to see during weekends in Prague?

Traverse the Charles Bridge and you'll be travelling back through almost 700 years of history. Commissioned by Charles IV in 1357, its Baroque statues are at their most atmospheric before the bustle of the day begins. The most famous of them is the statue of St John of Nepomuk, who was supposedly thrown off the bridge in his armour for failing to disclose the queen's secrets.

The spires and flying buttresses of Prague Castle zoom into the Prague skyline. The interior of this fairytale fortress is bursting with museums and galleries containing the Czech Republic's most prestigious art and artefacts. With works by Van Gogh, Picasso, Schiele, and Klimt, the National Gallery's collection of old masters includes a who's who of artistic masters. You'll also find treasures from the surrealist, cubist and Czech schools.

Eating and drinking in Prague

Start your culinary circuit with a coffee at Municipal House. Beneath ceilings flowing with Art Nouveau coving, you can contemplate the symbolism behind the sculptures. The structure was once the Royal Court and seat of Bohemian kings in the 14th century. Try trdelnik pastries filled with chocolate or cinnamon sugar. Enjoy sví?ková (braised beef) at century-old Café Louvre, which counts Albert Einstein and Franz Kafka among its famous patrons. Grab a refreshing, unfiltered dark and amber beer at 17th-century Strahov Monastic Brewery, and look out for traditional and hearty goulash soup, a vestige of the Austro-Hungarian Empire. Mincovna, in the Old Town Square, serves theirs with a refreshing pilsner.

Whereas Prague's puppets can be found hanging out all over the city, the shops near Charles Bridge have the largest variety. Shop for Bohemian crystal at Moser, or pick up some tea leaves. Weekend markets groan with wooden toys and other local specialities – try Havel's market in the city centre. If beer isn't your tipple, try Becherovka liqueur, a popular herbal digestif that packs a punch.