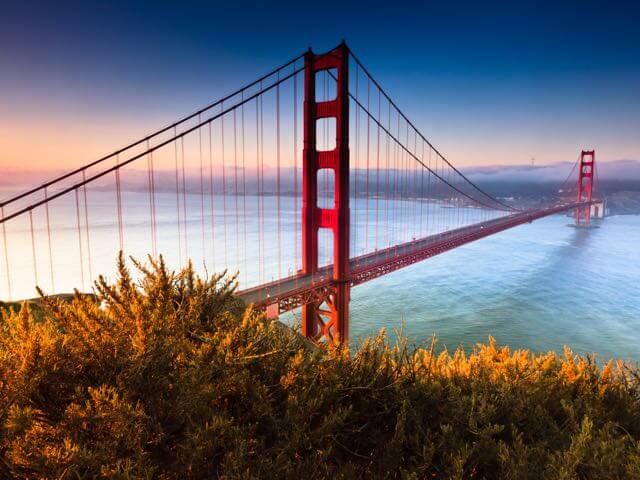 A Trip to San Francisco

Located on the tip of a Bay Area peninsula, in Northern California, is the bustling metropolis of San Francisco. Famous for its cable cars and the iconic Golden Gate Bridge, the city is one of the West Coast's most cosmopolitan destinations. From world-class museums and a lively nightlife scene, to historic attractions like the former Alcatraz prison, you'll never tire of this town. Book a flight and hotel for San Francisco to experience this great American city.

What to Know Before Visiting San Francisco

San Francisco International Airport is the primary facility serving those who arrive on flights for a weekend in San Francisco. The airport is served by a number of buses and a train connection to the city. Oakland Airport also serves the San Francisco area and a limited number of European carriers fly here, so do keep that in mind when looking, for example, for flights to San Francisco from Cork or a flight from Dublin to San Francisco.

Foreign visitors will need to apply for an online ESTA certificate (visa waiver form) at least three days before travelling — leaving more time to apply for this is better. The local currency is the US Dollar and San Francisco is seven hours behind (GMT-7) the United Kingdom.

When Is the Best Time to Visit San Francisco?

Package holidays in San Francisco are wonderful all year round, as the weather can be temperate or chilly, but is rarely very cold or hot. However, if you do want to be more likely to see the city in the sun, then a visit between April and September is advisable. The days often stay warm long into the autumn, thus making October and November a great time for city breaks in San Francisco – particularly for a balance between a pleasant climate and fewer crowds.

What Is There to Do in San Francisco?

Book a flight and hotel for San Francisco and first, check out the magnificent orange Golden Gate Bridge. Be sure to take a ride on one of the iconic cable cars. A visit to the former island prison of Alcatraz, once home to some of America's most high-profile convicts, including the mob boss Al Capone, is a must. For a mix of time spent outdoors, great views, and incredible museums, head to beloved Golden Gate Park.

The Castro District is the main LGBT neighbourhood and is packed with stylish bars and restaurants. Here you can also visit the former home of Harvey Milk, the iconic gay rights activist, and the state's first openly gay elected official, who was assassinated in 1978. Chinatown is another must-visit district. Besides the great restaurants, this particular Chinatown is considered the oldest in North America.

Places to Visit in San Francisco

No weekend in San Francisco is complete without a visit to Fisherman's Wharf. Pier 39 is the star of the show, offering shopping, restaurants, and stunning views over the bay. Many of the city's main family-friendly museums are also located here, including Ripley's Believe It or Not and Madame Tussaud's Waxworks.

What to Eat in San Francisco?

City breaks in San Francisco offer a truly global array of cuisines. There's great Mexican food to be found, starting at La Taqueria in the hip Mission District. The Swan Oyster Depot is a favourite for seafood in a very casual setting. The Arizmendi Bakery serves classic American pizza, while the dim sum from City View is considered some of the best in town.

What to Bring Back From San Francisco

When you book a flight to San Francisco, don't forget to leave room in your suitcase for shopping. Destination Fragrances captures the smells of the city and infuses them into candles and oils. Local California wines are a great gift to bring back from package holidays in San Francisco, as are treats from See's Candy, a much-loved California chocolatier.