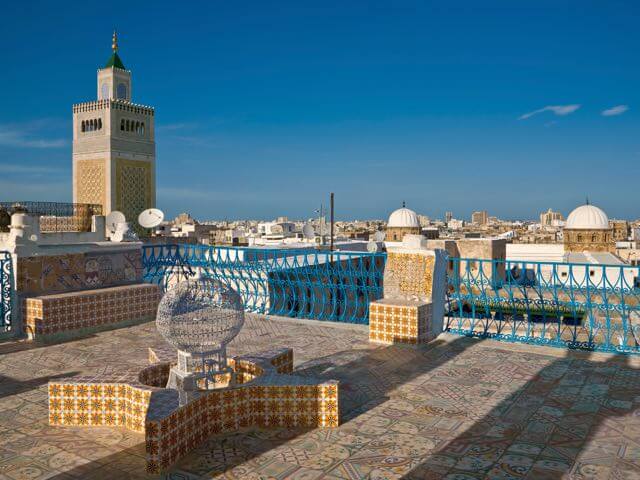 Tunis is a superb slice of Africa, combining verdant coastline with the shifting sands of the Saharan desert. The sheer vastness that can make the continenet of Africa seem unmanageable for travellers is unproblematic in Tunis, where the immense diversity of this dynamic continent is represented in an intense variety of landscapes. While city breaks in Tunis can fulfil the dream of blissful beaches, there is plenty to draw you inland away from the warm breezes and of the Mediterranean coastline. Ancient Roman ruins, souqs steaming with fresh coffee, camel racing are among the many attractions which make package holidays in Tunis unforgettable. Enjoy camel marathons, ancient amphitheatres, steamy hammams and smoky souqs when you book a flight and hotel in historic Tunis.

Before Booking A Flight And Hotel In Tunis

Flights and hotels in Tunis are easy to organise from the UK. Direct flights from Dublin to Tunis depart regularly, as do flights from Cork to Tunis. There is also no time difference between Tunisia and the UK, so travel is almost effortless. Arabic is the national language, though many Tunisians are also fluent in French due to the country's colonial rule. English is spoken widely among those in the travel industry, so you will find getting about unproblematic, even if your Arabic is less than perfect.

When Is The Best Time To Visit Tunis?

As with all African countries, summertime brings the heat. Therefore April through to June and September and October are the most pleasant months in which to visit Tunis. You might also wish to bear in mind that the fields in the northern part of the country are transformed into a sea of red poppies in the springtime, which is also apricot season. Tunisia's Medina Festival takes place during Ramadan and features a film festival among the religious rites. Camel marathons and poetry contests make December an attractive alternative, when the International Festival of the Sahara draws crowds in a celebration of nomadic culture.

What Is There To Do On City Breaks In Tunis?

What Is There To See On Weekends In Tunis?

Tunis' extensive treasures also feature the Roman mosaics and Phoenician artifacts housed the Bardo Museum, once a Husseinite palace. This spectacular exhibition offers a fascinating insight into the history and culture of this ancient African country.

Why not catch a show or a concert in an ancient Roman amphitheatre? Tunis' International Festival of Carthage draws the crowds in July and August with world class performers.

You will be transfixed by the somewhat disturbing yet fascinating sight of more than twenty thousand funerary urns at the Sanctuary of Tophet. The child sacrifices that probably took place here were consecrated to Baal Hammon and Tanit. First excavated in the twenties, the site also boasts numerous Roman ruins.

Africa is always an adventure and, like the country itself, the local cuisine has all the right ingredients to draw you back time and again to package holidays in Tunis. Tunisian treats like Brik, traditionally served at Ramadan, tempt visitors back to Tunis. A pastry shell is filled with fresh ingredients like egg, parsley and tuna. Couscous is served with lamb, pumpkin and broad beans. Tagine cooking is common and there is also Lamb a la Gargulette, a sumptuous mele of flavours which is cooked on hot coals buried in sand. Not to be confused with tagine, tajine is a frittata that typically features lamb, cinnamon and potato. Try the light blend of tomatoes and peppers known as Mechoia in the summertime.

Swathes of Souqs, laden with wares, fill the ancient alleyways of Tunis. Interspersed with mosques and ancient edifices, Tunis' Medina is well worth exploring. Come early in the morning for fresh breakfasts and fewer crowds. Pick up any number of wares, from shisha pipes to hand crafted goods in this ancient and atmospheric market district. Thanks to the talents of local craftspeople, mirrors and jewellery boxes are amongst the many works of art which can be purchased as a perfect momento of city breaks in Tunis.

Some 120,000 people find employment in handcrafts in Tunisia. Look out for the hand painted ceramic plates for which Tunis is famous. Decoration incorporates Islamic motifs and Roman and Punic geometry. Handmade chess sets are a charming way of brining a little of the country's culture home with you. Pop some Balgha slippers on your feet and you will feel like Tunisian royalty. These traditional slippers are inexpensive, and widely worn as they are both comfortable and durable.