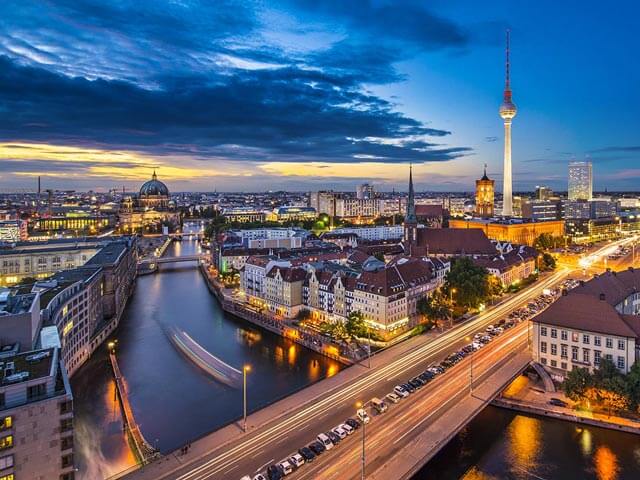 Berlin is a unique city with a unique history. Divided into East and West Berlin by the infamous Berlin Wall before the fall of Communism, the different ways that the two cities developed through the latter half of the 20th century can still be seen in Berlin's architecture, museums and other visitor attractions. A weekend in Berlin doesn't have to be all about history, however. You can enjoy a boat trip or a stroll along the picturesque River Spree, or make the most of the city's many parks and gardens.

What to Know Before Visiting Berlin?

Berlin is currently served by Tegel and Schönefeld airports, although Tegel is scheduled to close in 2020 when the city's new Brandenburg Airport is planning to open. Berlin Tegel is located in the north of the city, and formerly served West Berlin. Shuttle buses take visitors from Tegel to the city centre, ready to start package holidays in Berlin.

Berlin Schönefeld was previously the airport for East Berlin, and is located in the south-east of the city. Arrivals can take trains direct from the airport to the city centre, or use the local bus service. Flights to Berlin arrive from all over Europe, with regular flights from Dublin to Berlin, and flights from Cork to Berlin available.

German is the main language in Berlin, although many people will speak at least a little English. The currency is the Euro and Berlin is one hour ahead of UK time.

When is the Best Time to Visit Berlin?

City breaks in Berlin during the summer can often be blessed with very warm temperatures and sunny days; ideal conditions for swimming in the city's lakes and lidos. However, Berlin is a very different city in autumn and winter, when temperatures drop dramatically, and rain and even snow is to be expected.

In winter, the city is transformed, with colourful Christmas markets, ice rinks, and street vendors selling food and mulled wine pop up anywhere there is room to set up a stall. The largest Berlin Christmas Markets are in Alexanderplatz, on Unter den Linden and in the suburb of Spandau. Stay on for New Year's Eve to watch the firework display over the iconic Brandenburg Gate at midnight.

What To Do In Berlin?

Whatever your interests, there is something for everyone to enjoy on package holidays in Berlin:

What Places to Visit in Berlin?

Explore the German capital's fascinating history and culture on city breaks in Berlin:

What to Eat in Berlin?

German cuisine is famous for its heartiness and meaty ingredients, and food in Berlin is no different. The best way to grab a snack on package holidays in Berlin is to take advantage of the street vendors selling pretzels, bratwurst, classic Berlin currywurst and pancakes called kartoffelpuffer, which can be served savoury or sweet.

In restaurants, schnitzel is a tried and tested Berlin favourite, consisting of a meat cutlet – usually pork but sometimes turkey or veal – coated in delicious crispy breadcrumbs. Leave room for dessert, and enjoy a traditional apfelstrudel; layers of pastry with a warm apple filling topped with icing sugar and served with cream.

What to Bring Back from Berlin?

The ultimate souvenir of your weekend in Berlin is a chunk of the infamous Berlin Wall; you can buy pieces which are certified to be the real thing from the Berlin Wall Memorial in Berlin Mitte. Beer steins or even a set of traditional German lederhosen make great gifts for family and friends, while the Christmas Markets are the perfect places to shop for traditional decorations for your tree.