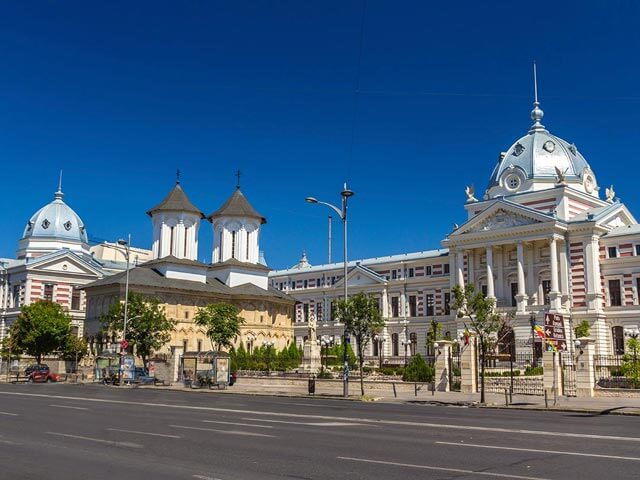 Bohemian and orthodox, romantic and techy, Bucharest has hitherto escaped the attention of most international travellers. Shrouded in mystery like its fictional compatriot, Count Dracula, this seductive city makes it easy to see how the land came to inspire myth. Today, the city is growing in popularity due to its sophistication and understated cool.

Neoclassical villas festooned with vines populate the city centre, while locals luxuriate at high-rise developments on the city periphery. Superb museums are interspersed with 17th-century Orthodox churches, while the gargantuan Palace of Parliament has to be seen to be believed. Discover why the city is nicknamed 'little Paris' on package holidays in Bucharest.

Before booking flights to and hotels in Bucharest

It couldn't be simpler to arrange flights to and hotels in Bucharest. Flights from Dublin to Bucharest run regularly, as do flights from Cork. Although shuttle buses run regularly to the city centre, taxis are relatively inexpensive. The currency, the Romanian leu, can be purchased at a favourable rate in the city. Romania is two hours ahead of the UK, so jet lag likely won't be a problem. Many Romanians in Bucharest understand English well.

When is the best time for city breaks in Bucharest?

Spring, early summer and autumn are the most pleasant times to visit Bucharest, which can experience extreme weather. Christmastime in the city is especially atmospheric, as Bucharest's historic buildings only gain splendour beneath a dusting of snow. Wrap up warm and join in warming festivities and ice skating like the locals. As summers are especially hot, many city dwellers head to the mountains and seaside during the summer months.

What is there to do on weekends in Bucharest?

Take a trip into Romania's past at the fascinating National Museum of the Romanian Peasant. A vast array of paraphernalia has established this collection in the hearts of many a visitor. An 18th-century church stands directly behind the museum, and a Communism collection downstairs explores how Romania's dictatorship undermined its traditional way of life. Don't miss the sublime Snagov Monastery, which overlooks Snagov Lake. A 1,000-year-old church and pieces of the Dracula myth add to the 14th-century monastery's allure.

Wander around the vast Palace of Parliament, an administrative building second in size only to the Pentagon. More than 3,000 rooms unfold across 330,000 square metres. Bring your passport if you wish to take the tour, which lasts an hour. The former Ceau?escu Residence is another fascinating insight into the corruption of the Communist dictatorship. The opulent home offers visitors a peek into the private lives of Romania's most famous political couple.

What is there to see on weekends in Bucharest?

Here are some top sights to seek out in Romania's eclectic capital city:

Eating out in Bucharest

Like many a Bucharest building, the ARTIST is set in a delightfully dilapidated villa. It's one of the city's best restaurants, serving chic meals using local ingredients. Buffalo burrata served at Paine si Vin hails from the hills outside Bucharest, and comes melted on fresh flatbread pizzas. Relax at Vatra, a sun-dappled oasis near the Ci?migiu Gardens. Start your meal with ?uic?, Romanian plum brandy, before trying Romanian classics such as delicately cooked sarmale (cabbage rolls). Don't miss the cherry cheesecake at Ceainaria Infinitea, a delightful tea house set in a split-level garden. Stroll through Pia?a Obor market, Romania's largest, to find everything from spices to an array of local cheeses.

What to bring home from package holidays in Bucharest

Bucharest has many markets, filled to the gunnels with crafts and produce from the Romanian countryside. Come to one of the oldest markets in the capital at Pia?a Matache, situated at the crossroads of Calea Buze?ti and Calea Grivi?ei. A celebrated trading route, its dairy section purveys Romania's best cheeses. Handmade jewellery can be found at Pia?a Amzei, alongside organic bakeries. Unleash your zeal for secondhand merchandise at Valea Cascadelor, the city's giant flea market. Market stalls heaving with Communist-era memorabilia vie with photos and vinyl for your attention.

Check out the city's plethora of boutiques and independent shops to sample some of the city's creative flair. La Fabrica is full of stylish knick-knacks, while C?rture?ti Carusel bookshop sells beautiful stationary. Dizain?r is a fantastic design shop featuring products from local Romanian designers. Meanwhile, Hanul cu Tei has been converted from an old inn, and is now home to several restaurants and charming shops, perfect for a little Romanian retail therapy.