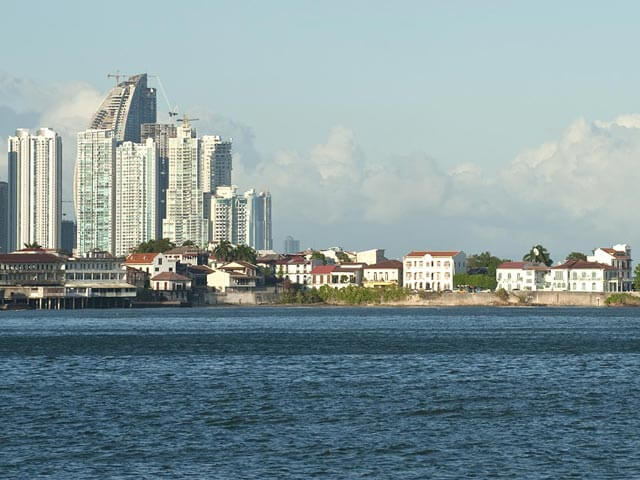 Sitting on the Pacific end of the Panama Canal in Central America, Panama City is the country's capital and largest city too. It is a cosmopolitan, modern city which combines historic architecture in the old town with beach living and and lots of family-friendly activities. The city is firmly in the tropics, with temperatures around 30C all year round which guarantees warm weather for any package holidays to Panama City.

Panama City is six hours behind the time in the UK and Ireland (GMT-6) and although the official language is Spanish, English is also widely spoken. The official currency is the Panamanian Balboa but US dollars are just as widely accepted. Tocumen International Airport is where flights to Panama City arrive, around 10km to the west of town. There are no direct flights from Dublin to Panama City, but there are connections through Amsterdam, Madrid and New York. The selection of Cork to Panama City flights is similar, with Amsterdam offering the most flexible flight connections.

What Is Best Time Of Year Package Holidays In Panama City?

There is no need to be concerned about cold weather when booking for weekend in Panama City as the temperature rarely drops below 30C. The driest months of the year are between November and April and with an average of nine hours of sunshine every day in January, a post-Christmas flight and hotel break in Panama City could provide a welcome respite from the Northern European winter.

What things can you do when on a flight and hotel break in Panama City?

Panama City mixes the modern with a historical centre, so whether you are into the Spanish colonial architecture of the UNESCO heritage listed old town, or oceanside walks alongside ultra-modern skyscrapers you won't be disappointed. Anyone with even a passing interest in shipping will want to visit the famous canal and if nature or relaxation is your thing there are endless idyllic tropical beaches and virgin rainforest just a short drive out from the city centre. Panama City is also Central America's fashion capital, with dozens of malls for a spot of retail therapy.

There is lots going on and you will probably need more than a weekend in Panama City to do it all. There are however some top visitor attractions that you are not going to want to miss including:

Wide Variety Of Options For Dining Out In Panama City

Unsurprisingly for a city so connected with the sea, fish and seafood are a big part of eating out in Panama City. The freshest and best can be found at the city's fish market on the Cinta Costera, where each little stand has a different speciality to tempt visitors with. If you prefer more formal dining, try Donde José restaurant, regularly listed as one of the best in the Americas. The Panamanian chef uses only local ingredients and with a restaurant only seating 16 it is more like a dinner party than a restaurant meal. One local dish to try is Sancocho, a rich stew made with chicken, corn, plantain and a generous sprinkling of coriander.

How To Shop For Perfect Panamanian Souvenirs

What better souvenir of your trip than the iconic Panama hat? They are sold all over the city but Victor's Panama Hats in the old town offers the traditional experience. Other popular souvenirs are colourful embroidered textiles, woven baskets and handpainted ceramics. The Mercado 5 de Mayo is an artisan market, with locals selling their handcrafted items such as molas, hand embroidered colourful panels which are perfect for making into a cushion cover.