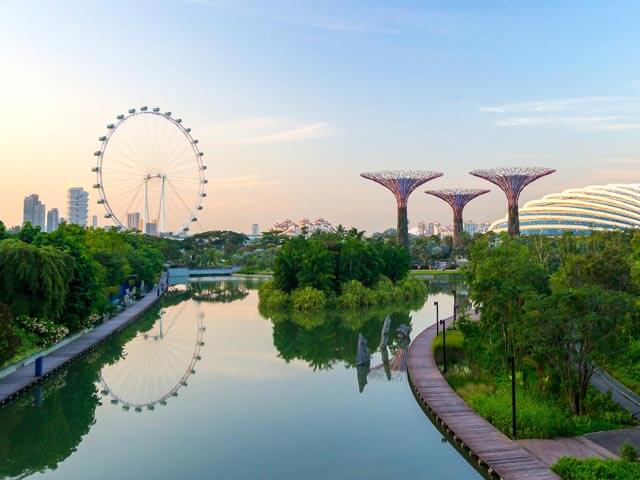 Singapore occupies a unique position in South East Asia, as it is an island state located between Malaysia and Indonesia. More westernised than most others in the region, Singapore has only been independent since 1965, having been a British colony for almost 100 years. It was only in the early 20th century that Singapore began to rise to prominence since Sir Stamford Raffles docked in 1819.

What To Know Before Visiting Singapore

Singapore is 8 hours ahead of GMT and uses the Singapore dollar ($). There is one airport, Changi, located on the eastern side of the island. Often chosen as one of the world's best, it has easy access to the city itself. Flights to and from Singapore can be checked here, while there are also flights from Dublin and Cork to Singapore. There are a variety of Singapore flight and hotel prices to suit all budgets.

Visitors from the USA, UK, Australia, New Zealand, South Africa and most European countries do not require a visa for stays of up to 30 days. English is widely spoken in Singapore, and Mandarin, Tamil and Malay are also official languages.

When Is The Best Time To Visit Singapore?

Singapore, like most of South East Asia, has a hot and humid climate. April to August are the driest months, although rain can (and will) still fall, while November to January are the wettest months, when heavy showers are frequent. With average daytime temperatures around 30 degrees, a Singapore packaged holiday provides access at any time of the year.

Around February, Lunar New Year celebrations are probably the largest events of the year. If motor sport is your thing, the annual Formula One Grand Prix, held around September, is an excellent time to visit, although Singapore flight and hotel prices increase. The Great Singapore Sale (a nationwide shopping bonanza) is usually in June when visitors arrive on Singapore package holidays.

What To Do In Singapore?

Singapore has something for everyone and, with an efficient transport system, it doesn't take too long to get around. Weekends in Singapore involve shopping, as highlighted by the number of malls that abound in the CBD. Although somewhat expensive, Singapore's nightlife features renowned nightclubs, as well as cool bars, pubs and restaurants for a drink after the day's heat.

Easy trekking can be found along the Southern Ridges walking trail, which includes a raised walkway, and there is great biking on Pulau Ubin off the north east coast. For more outdoor activity, the Singapore Botanic Gardens are world class and sprawl over 63 hectares.

What Places To Visit In Singapore?

Despite its size, and even as a city break, Singapore has plenty to see:

What To Eat In Singapore

Singaporean food is varied and most obviously influenced by its Chinese heritage. Food courts and hawker stalls are a good (and affordable) place to start, with Tekka Centre and Maxwell Road Food Centre excellent in both variety and taste. Chili crab and black pepper crab, two famous national dishes, can be found at both.

Kaya toast (toast with coconut jam) is commonly eaten as a snack and found everywhere. Other common meals include Hainanese chicken rice, fried hokkien mee (fried egg noodles with prawn, pork and gravy) and char kuey teow (stir-fried noodles with prawns and vegetables). There are also excellent Indian and Middle Eastern restaurants in and around Little India.

What To Bring From Singapore

With a vast array of malls and shops available in Singapore, there is something for everyone. Budget-price electronics can be found at Sim Lim Square, whilst fabrics and textiles are best sourced around the Little India and Kampong Glam neighbourhoods. There are many artisans producing hand-made goods, an example being those of Little Shophouse, where hand-beaded shoes, ceramics and other items are made and sold. One thing you won't be bringing home from a Singapore city breaks, however, is chewing gum — it's illegal to sell it!