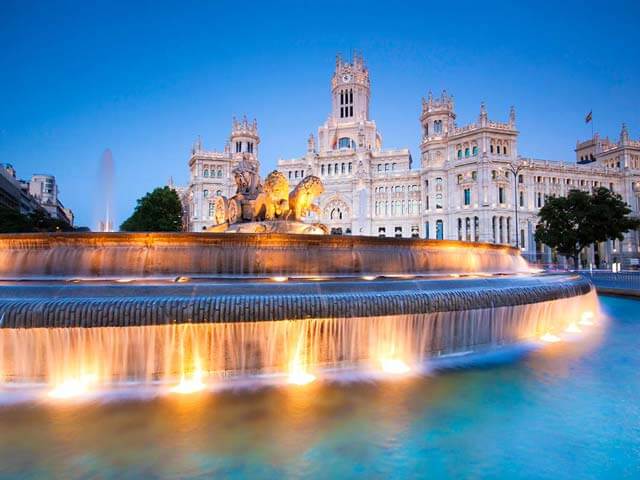 Situated in the middle of Spain, surrounded by the peaks of the Sierra de Guadarrama, Sierra del Norte and Sierra de Gredos mountain ranges, Madrid has been capital of Spain since the 16th century. Home to the Spanish royal family and the scene of fascinating political upheaval in the 20th century, Madrid offers plenty of history, culture and great tapas.

What to know before visiting Madrid

The main language in Madrid is Spanish, though you will find that most people who work in hotels and restaurants speak enough English to help out with the basics. The currency is the euro, and the time zone in Madrid is one hour ahead of the UK's.

The Spanish capital is served by Barajas Airport (MAD), which is in the city's northern suburbs and served by a direct link with Madrid via the metro system. Flights to Madrid arrive from all over the world, and you can fly from Cork and Dublin to Madrid regularly.

When is the best time to for Madrid weekends?

As you might expect for a city in Spain, Madrid can get very hot during the summer months. You may find that the milder months of spring and autumn offer more pleasant temperatures for package holidays in Madrid. Surprisingly, thanks to its high altitude, Madrid can get chilly during the winter months, and snow is not an uncommon sight in the city's streets.

What to do in Madrid

Whereas there are many ways to spend your time on a weekend in Madrid, these suggestions will help you make a start.

Places to visit in Madrid

Once you've booked your flight to and hotel in Madrid, you'll find several amazing visitor attractions and fascinating museums to choose from.

What should you eat in Madrid?

Madrid, and indeed all of Spain, is famous for its tapas, small snack-like dishes made from a variety of ingredients, usually served with drinks – though you can easily order a selection and make a meal of them. Favourites include Spanish omelette, potato croquettes, anchovies and chorizo, a popular spicy Spanish sausage. Make time for a relaxed evening drink and tapas on your weekend in Madrid; the best bars for people watching are in Plaza Mayor and Plaza Santa Ana.

What to bring back from Madrid

Decorated Spanish shawls and fans make great gifts. Alternatively, take back some local wine or olive oil to remind you of your package holidays in Madrid in the weeks to come. Sports fans may want to visit the Real Madrid shop at Bernabéu to pick up a jersey or other memorabilia.