Halloween is right around the corner, and though your trick-or-treating days may be long past, you can still prepare some tasty treats, both sweet and savory and throw a scary soirée. Here are 20 scary Halloween treats to make…from scary finger cookies, to vampire cupcakes, mummy hot dogs and true blood soups.

This apple looks so scary your guests might not want to touch it at all, but it will make your other, more common treats look scary as well.

To prevent it from browning, spray some lemon juice on the carved parts.

2. Ninja Heads on a Plate

These cutesy ninja heads are nothing more than chocolate covered Buckeye Balls. Mix peanut butter with confectioners sugar and butter to make small balls. With a toothpick make two small holes for the eyes, then dip two sides in melted chocolate and serve on a silver plate.

You’ll need red jelly strings and an edible ink pen to make this Halloween snack. First make a hole through a marshmallow and push the jelly strings with the wrong end of a teaspoon, then draw the scariest face you can think of. Feel free to play and draw an entire set of gruesome emotions on your marshmallow’s powdered face.

A pumpkin pie shaped as PI might not be as scary as the treats we’ve been showing you, but it will surely make dinner that night a much stranger activity than the usual pass me the salt, thank you.

Craft bones from pretzel sticks and small marshmallows and arrange them on a plate in a shape of a human skeleton. If you’re really crafty sculpt a marshmallow to make a skull as well.

See also: Places to go for a Spooky Halloween in Europe

Love hummus? What about mixing in a bit of food coloring and shaping it as a brain?  Your guests will be, if not horrified, at least disgusted. Just don’t tell them what it is.

Cut some store-bought dough (or make your own by mixing flour, baking powder and water) in strips and mummify some hot dogs. Bake them for a few minutes in the oven until they turn golden, then paint the eyes with mustard. They are mummy-licious.

Have you ever kissed a toad hoping it will turn into a prince? (Feel free to tell us all about it in the comments section:) In any case, to make these chocolate toads you have to get a plastic frog mold. Then melt your chocolate, pour it in the molds and keep it in the fridge for a couple of hours before serving. For an extra touch of gruesome add some green food coloring to the melted chocolate.

Want to get rid of those Bloody Marys this year? Switch to creamy, bloody beet soup. For an extra touch of horror skip the spoon and drink directly from the bowl, making sure to let some of it drip on your chin. Don’t do this if you’re going to wear your favorite t-shirt.

A finger anyone? Cut a cheese-covered pizza in thin triangles and add olive halves as fingernails. Any extra touch of ketchup is welcome.

We know everyone is carving pumpkins, not watermelons, but why not give it a try? The flesh of the fruit is softer and easier to carve into than a pumpkin. Carve a scary face and add two bananas as horns. Scary!

If you can’t find these chocolate eyeballs ready-made at the store, find some white aluminum wrapping paper and paint the green eyeballs on top. You could even try this with oranges for extra-large monster eyes.

Make or buy simple donuts, smudge orange icing on top and draw scary faces on them. Not the scariest of them all but a success for sure.

Need an idea to dress up an otherwise not so scary yogurt dip? Arrange five carrots as they would be the fingers of a freshly chopped, horrific hand. If you mix some blue food coloring into the yogurt you can make this dip even more hair-raising than it already is.

This beautiful Day of the Dead skull can be easily made with a skull mold and fresh figs and berries. We’re warning you though, you’ll want to stop people from trying to cut into it.

16. A peas and toast graveyard

A graveyard in your kitchen for Halloween? Nothing easier: fill a square transparent dish with green peas, then add the tomb-shaped toast on top of the graveyard grass. Write RIP on the toast with balsamic vinegar or Marmite/Vegemite.

To fake the bloody bite on these white glaze covered cupcakes dip a toothpick in strawberry jam or syrup.

If these cream-covered cupcakes look a bit sad, that’s because they didn’t know they were in for some serious mummification. Add jelly eyes and create the cream “strips” with a small butter knife.

Maybe the scariest of them all: shortbread fingers! Add an almond previously dipped in red food colouring and serve warm. The temperature will add to the feeling that you are actually eating a finger.

Last but not least, an easy way to create scary-looking muffins is to add food coloring to the dough. Blue, green and anything neon colored is the best.

Tell us which one you’d like to try or if you have a recipe of your own! 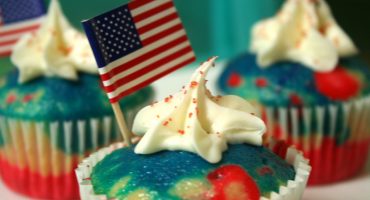 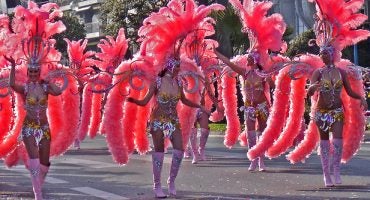 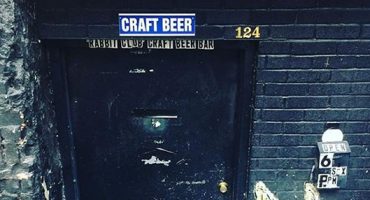 One response to “20 Scary Halloween Treats to Make”