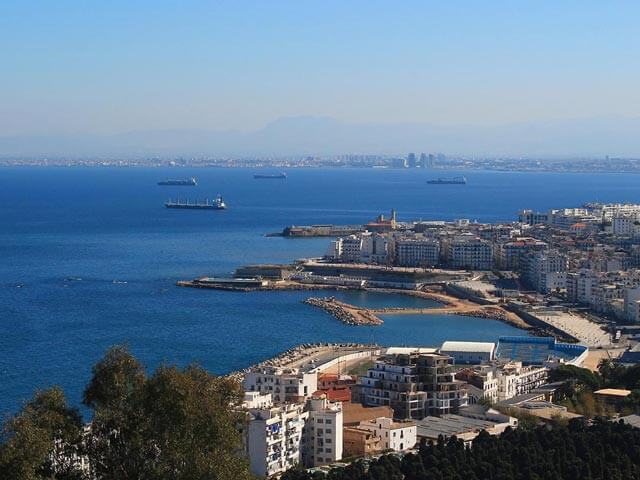 The traumatic history of Algiers seems out of place once you see its sublime architecture. Yet the confluence of different styles (French, Islamic, Socialist) is a testimony to the deep heritage of this melting pot of culture. A warren of streets trickle down to the blue waters of the Bay of Algiers. As you explore further, you will discover Socialist monuments hidden away on the hillside, which is crowned by an impressive Casbah. Rich and varied and full of surprises, there is much to recommend weekends in Algiers.

Before Booking A Flight And Hotel In Algiers

Flights and hotels in Algiers are easy to organise from the UK. Flights from Dublin to Algiers run frequently, as do flights from Cork to Algiers. There is no time difference between Algeria and the UK, so travelling is painless. Links between the city and the airport are also strong. The Algerian Dinar is in circulation in the city. Arabic is the local language, though you will also find a lot of French and nearly everyone working in the travel industry speak English.

When Is The Best Time For Weekends In Algiers?

Beaches are packed in the summer heat, so its best to avoid the summer period, when the heat of the Sahara is almost overwhelming. Spring and autumn are more comfortable periods for package holidays in Algiers. October is also date season in Algiers, when the plump beauties crop up everywhere. Spring is less crowded, making the cultural attractions and beaches all the more inviting.

What Is There To Do On Package Holidays In Algiers?

Visit the Casbah's Museum of Popular Arts and Traditions, an ornate example of an Ottoman town house,it follows the traditional template. Enter an inner hallway and follow the staircase to see an impressive collection of Algerian arts and crafts. Another sumptuous mansion is known by its owner's name, Dar Hassan Pacha. The house is packed with contemporary calligraphy and illuminated manuscripts sourced from across the Middle East and North Africa. The Emperor Napoleon stayed here during his 1860 tour after Algiers fell to the French.

Discover Algiers' spectacular post office, a French designed building with Moorish overtones. Grande Poste must have the most ornate post box in the world. You can also visit the on site museum to learn more about this historic edifice or wonder at the diversity of human life at the Bardo Museum of Prehistory and Ethnography. The interactive exhibition takes you on a tour that originates with Neanderthal paintings from the Sahara. Wander through sub-tropical gardens to the stately Summer Palace.

What Is There To See On City Breaks In Algiers?

Algiers' polyglot identity is expressed in Moorish architecture, French culture and much more besides. Here are some highlights of this paradoxical though visually stunning city:

Carpets, folk art and spices are among the strongest choices of souvenir in the city. The atmosphere of this unique destination is woven right into the fabric of its textiles. Look out for woodwork and brass ware, as well as imports from the nearby Sahara region and be prepared to haggle. If you can, take a trip to Ghardaia, where authentic goods cost less. Berber jewellery is everywhere but beware the coral which is not sustainable. Rue Didouche Mourad is Algiers' premier shopping street and is packed with boutiques.