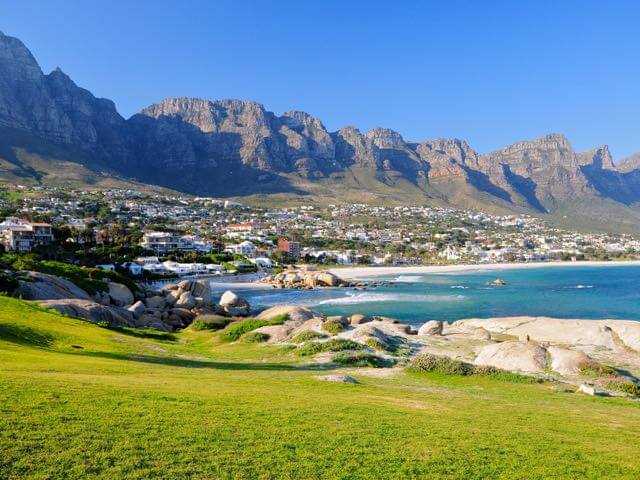 An Introduction To Cape Town

Famed for its spectacular landscapes and excellent weather, Cape Town is Africa's most south westerly city and one of the world's most iconic destinations. The imposing Table Mountain dominates the city scape and offers majestic views over this cosmopolitan metropolis. As well as the rolling hills and glorious beaches, colourful buildings, wonderful restaurants and an emerging art scene all coalesce to make a flight a hotel in Cape Town simply a must.

What To Know Before Visiting Cape Town?

Cape Town International Airport is the principal transport hub for those arriving for city breaks in Cape Town. It's located roughly 12 miles from the city centre by the rapid transit bus network or local taxi. Visitors with a British passport don't require a visa to enter South Africa and can stay for a duration of 90 days for the purposes of tourism. The local currency used in Cape Town is the South African rand and one British Pound is equal to roughly 15 Rand, though it must be noted this can fluctuate. Cape Town is just 2 hours ahead of the United Kingdom (GMT+2).

When Is The Best Time To Visit Cape Town?

The optimum time for package holidays in Cape Town is late January to late April. These are the driest of South Africa's summer months and the best time for exploring the magnificent beaches and glorious vineyards. However, even in winter temperatures are mild and travellers should not dismiss the opportunity to visit during this time. The winters have distinct advantages such as cheaper prices and quieter beaches and it's also the best time to spot migratory whales who arrive to the waters off South Africa between July and October.

What To Do In Cape Town?

A weekend in Cape Town is not complete without a visit to one of the magnificent beaches on the Cape Peninsula. If you're looking to swim, the beaches on the False Bay side are preferable; St James is a particular favourite, with other notable offerings including Kalk Bay, Clovelly and Simon's Town. It's also possible to partake in a spot of shark diving, with 40 different species living the waters which surround the city with a flight from Dublin to Cape Town.

A visit to the Cape vineyards is simply a must when you book a flight and hotel in Cape Town. Just an hour's drive from the city, you'll find yourself amid the rolling hills and peaked mountains of the historic wine estates of Stellenbosch and Franschhoek. Jewellery is cheap in Cape Town by international standards but there's much more to shopping here than bracelets and rings. Popular shopping localities are Cape Quarter, known for its fashion boutiques, and Canal Walk Shopping Centre which has a diverse range of impressive outlets.

Long Street is the place to drink and party when you book a flight and hotel in Cape Town, and travellers can soak up the lively atmosphere at a range of establishments from upscale cocktail venues to unpretentious bars with retro vibes.

What Places To Visit In Cape Town?

The undisputed highlight of package holidays in Cape Town is a visit to the majestic Table Mountain – the vistas from the summit are simply breathtaking. The most conventional way of reaching the top is to take the cable car but an extended hiking trip is also a possibility. Adrenalin seekers can also opt to abseil down the side of the mountain. The principle arts and cultural area is known locally as museum mile. Company’s Gardens, a former vegetable garden and currently a place of reflection on South Africa's apartheid past, is lined with museums such as The National Galley, The Houses of Parliament and Iziko Slave Lodge. Other sights and activities to add to your weekend in Cape Town itinerary include:

What To Eat When You Visit Cape Town

Biltong is the national snack food of South Africa and a must try when you book a flight to South Africa. This dried and cured meat, often beef, is flavoured with vinegar, brown sugar, salt and pepper and can be picked up almost anywhere around the city. Boerewors is another foodie favourite. It's a sausage similar to a bratwurst but with a much more complex flavouring and can be enjoyed on its own or wedged inside a delicious bread bun.

BBQs, which are known locally as braais, are a staple of South African life. The most famed food to come from this national pastime is the Sosatie. Ostensibly a kebab, this lamb skewer is flavoured with sweet chutney and curry powder and makes a wonderful lunch or late night, post-beer snack.

What To Bring From Cape Town?

Shopping for a memorable souvenir is one of the delights of city breaks in Cape Town and the city offers an eclectic and unique range of options to take home. African wood carvings are a popular choice and you can pick-up budget options from craft markets or designer pieces from boutique stores. Wire art is an affordable, fun gift which can be purchased cheaply from an array of stalls you'll stumble upon across the city.

Jewellery and precious stones such as diamonds and tanzanite are much cheaper than in the United Kingdom, and many travellers want to buy these stunning pieces when they travel on a flight from Cork to Cape Town. Just be sure to purchase your stones and jewellery from an authentic and registered retailer.