You hardly need us to tell you about the Empire State Building, Central Park and the Statue of Liberty – they are iconic, and are surely already on your list of things to do in New York. The main sights of the city are must-do experiences when visiting the US, but what we share with you here are the things to do in New York that you won’t find at the tourist information center: Where to get the tastiest hot dog in the city, free activities and where to shop for bargains. The non-touristy stuff.

What to eat in New York 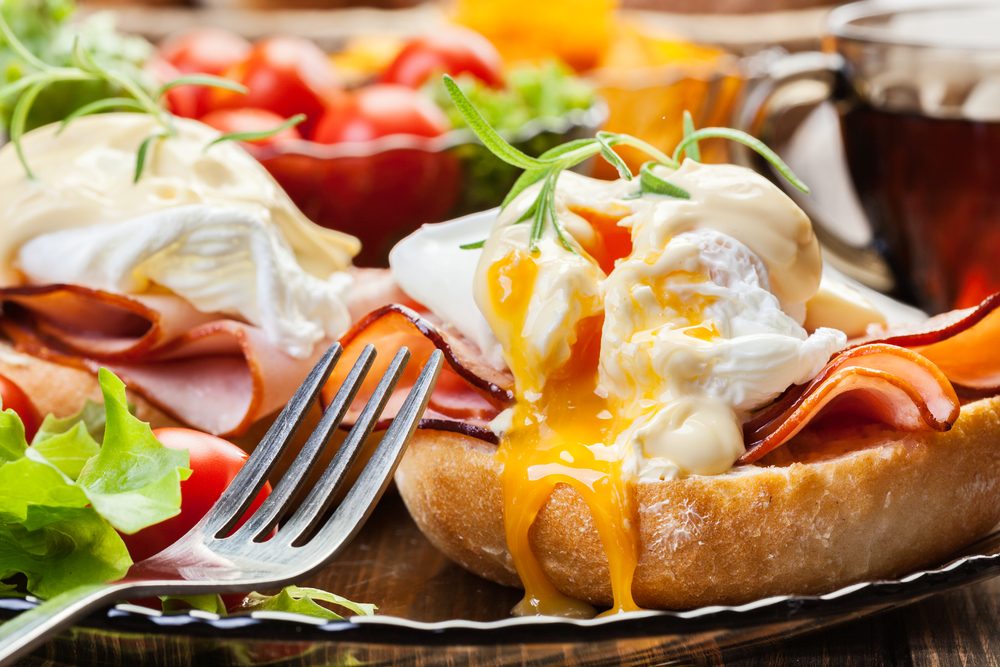 The Bagatelle is a restaurant located in the trendy Meatpacking District, serving up a delicious brunch menu. Think freshly squeezed juices, avocado tartine with poached eggs, two-foot long lobster rolls and Bagatelle XXL banoffee pancake with caramelized banana and blueberries… You get the idea! Not only is the food mouthwateringly good, the atmosphere is second to none. When you brunch at Bagatelle, the food is followed by its notorious brunch party. Dancing, champagne, sparklers and loud music fill up the room. One moment you’re tucking into an avocado toast and the next you’re dancing on the tables in the middle of the day. The Bagatelle brunch parties on Saturdays are legendary amongst locals – a must when you’re visiting New York! 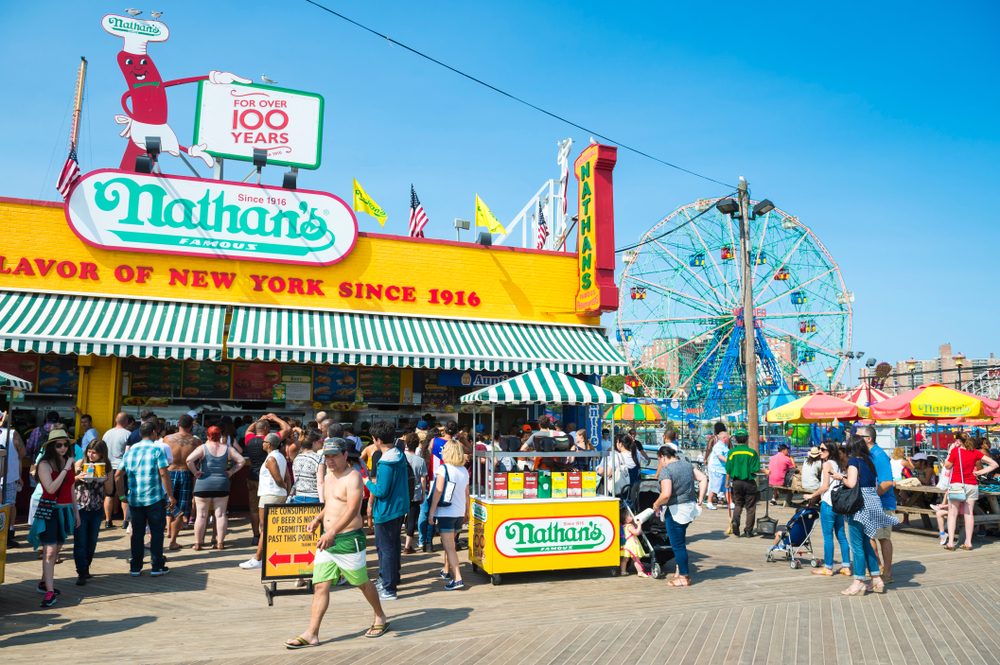 One thing is for sure, you cannot leave New York without going to Nathan’s and trying the best hot dogs on Coney Island. Nathan’s started off as a hot dog stand in 1916. Today it’s an institution in the USA, with 1400 stores across the country. The Nathan’s on Coney Island is where it all started, with a secret hot dog recipe still used to this day. If you find yourself in the neighborhood around the 4th of July, you can join in on one of the most iconic things to do in New York City – a hot dog eating competition! Contestants try to eat as many hot dogs as possible in 10 minutes. The record as it stands today is 74 hotdogs! Can you beat that? 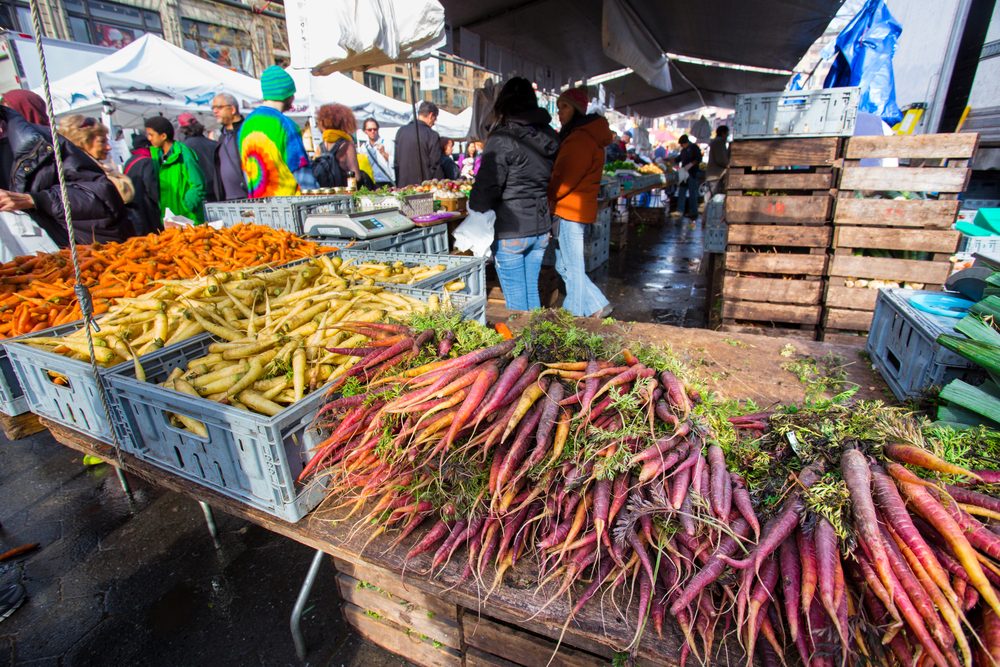 New York is not the cheapest place to go for a holiday, so if you’re looking to fill your belly without paying a fortune, Union Square Greenmarket is your place. Here you can enjoy dishes prepared by regional farmers, fishermen or bakers who come and set up their stands on Mondays, Wednesdays, Fridays and Saturdays. Come for the fresh fruits and vegetables, heritage meats and award-winning farmstead cheeses and stay for the artisan breads, jams, and wines. Make sure to catch one of the live cooking demonstrations by some of New York’s hottest chefs too! 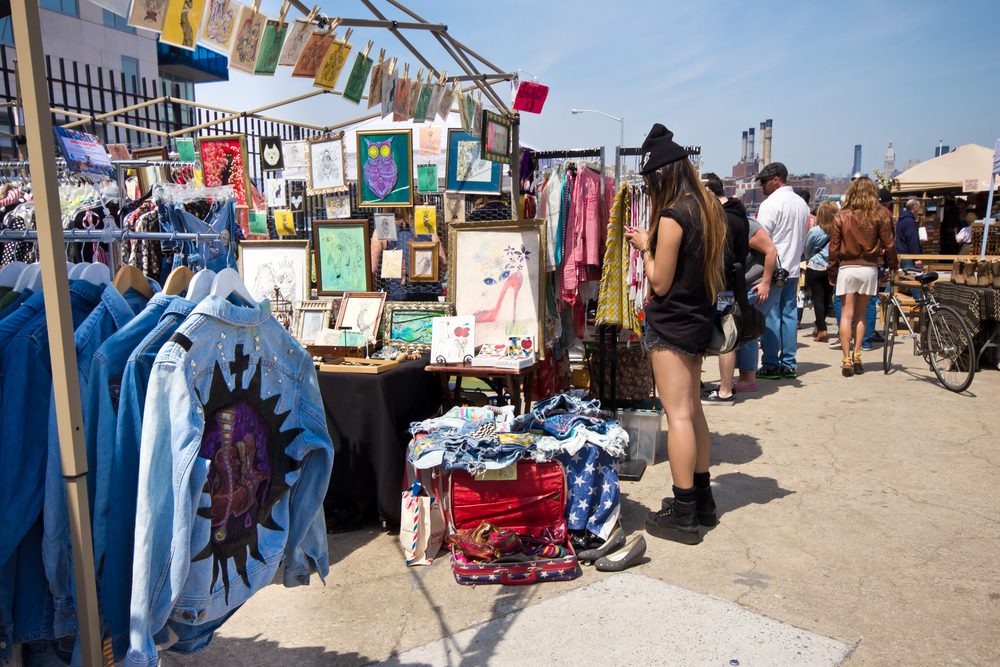 New York is home to some very expensive and luxurious shopping streets and shopping malls. Macy’s in Herald Square is one of the largest department stores in the world, taking up an entire city street block. But, if you’re looking for somewhere more local and intimate to do your shopping, check out the NYC flea markets – an important part of the New York lifestyle. Not only are flea markets full of unearthed second-hand treasures, but many of the markets also sell tasty and creative street food from all over the world. A day spent foraging for antiques, topped off with a freshly baked bagel is one of the best things to do in New York, if you ask us!

Some of the best flea markets in New York City are:

Brooklyn Flea market is open every Saturday in Williamsburg from 10am to 5pm, and every Sunday in DUMBO under the Manhattan Bridge from 10am to 5pm. The New York Times described a trip to the Brooklyn Flea market as “one of the great urban experiences in New York”, and we couldn’t agree more. It’s one of the biggest flea markets in the city, with hundreds of vendors. Whether you’re after furniture, fresh food, vintage clothing, collectibles or antiques, you’ll certainly find something to bring home with you.

Grand Bazaar NYC on the Upper West Side in Manhattan is open every Sunday from 10am to 5:30pm. It’s the place to go in New York for vintage clothing, furniture, jewelry, and crafts. If you shop here you’ll also be giving back to the community as Grand Bazaar NYC donates 100% of its profits to four public schools. It raises funds for arts, enrichment, and classroom essentials for over 2,000 children.

Artists & Fleas in Williamsburg is located inside a former warehouse, which makes it a great thing to do in New York when it’s raining, as it’s one of the few flea markets that is fully covered. Artists & Fleas have over 45 sellers selling fashion, vintage, art and design. It’s open on Saturday and Sunday between 11am and 6pm.

Activities in New York to get your adrenaline pumping

Kayaking on the Hudson River 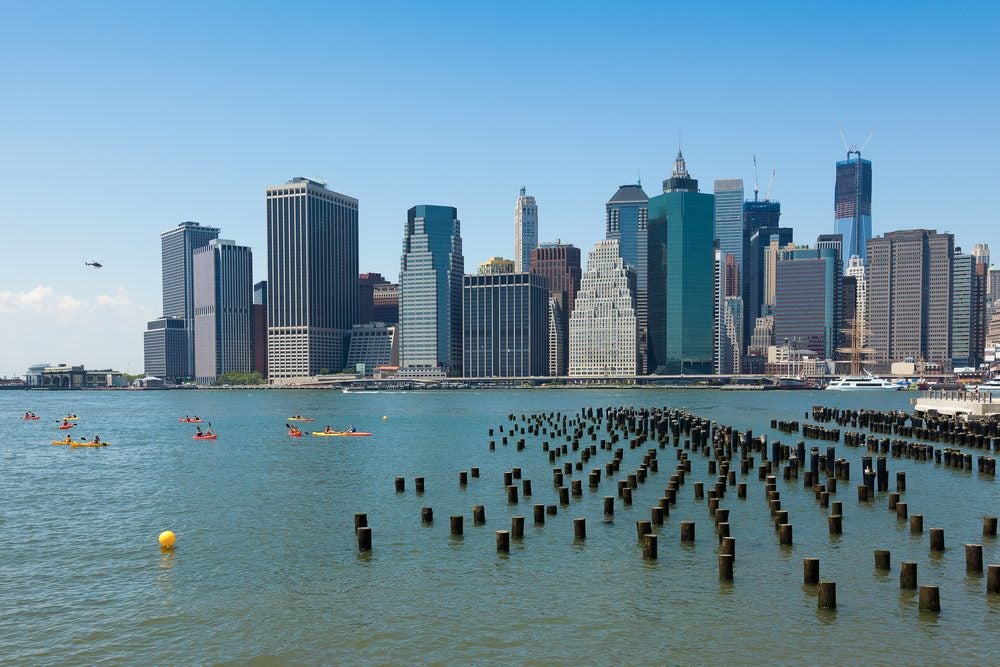 Feeling adventurous? If you want to experience something different, head over to the Pier 26 Boathouse. Kayak down the Hudson River and experience New York City from a perspective that is rarely seen – from the water. The Downtown Boathouse is an all-volunteer nonprofit organization dedicated to providing free public access to the harbor in New York City –  that’s right, during the summer you can use a kayak for free for 20 minutes. It’s a fun way to cool down and keep active while you’re there.

Ride the Oldest Roller Coaster in the United States

If you are in New York, you cannot pass up a chance to ride the oldest roller coaster in the country. Located at the Seabreeze Amusement Park just outside Rochester, the Jack Rabbit roller coaster was built in the ‘20s. Believe it or not, it’s still operational (if a little rickety)! In its heyday it was the fastest roller coaster in the world, and it still remains to be one of the funnest things to do in New York! As you leave the ride, spot one of the original signs from the ‘20s that reads “pay on your way out”.

Free things to do in New York

New York is expensive, but thanks to its size and variety of activities, there are plenty of great things to do in New York that are completely free. 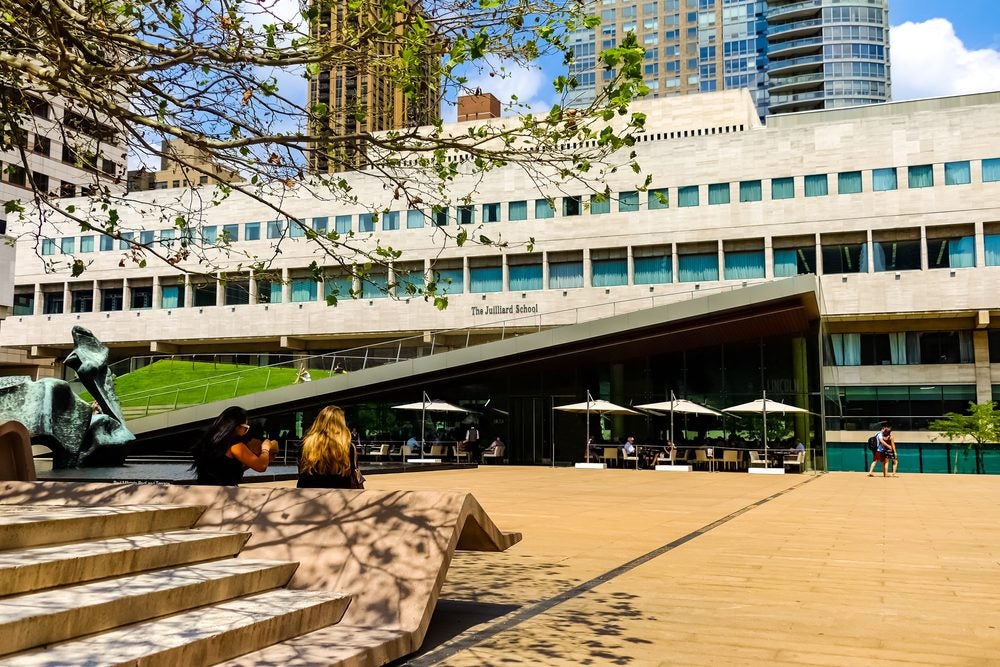 One of the best kept secrets in New York are the free concerts put on by Juilliard students throughout the year. Juilliard is one of the most prestigious performing arts schools in the country, and the concerts feature the most promising classical musicians in America. Tickets can be picked up at the Juilliard School box office during daytime hours, and the concerts are on most Tuesday nights at 8pm. It’s a great alternative to watching a Broadway show –  a night of classical or jazz music is the perfect romantic date night in New York! 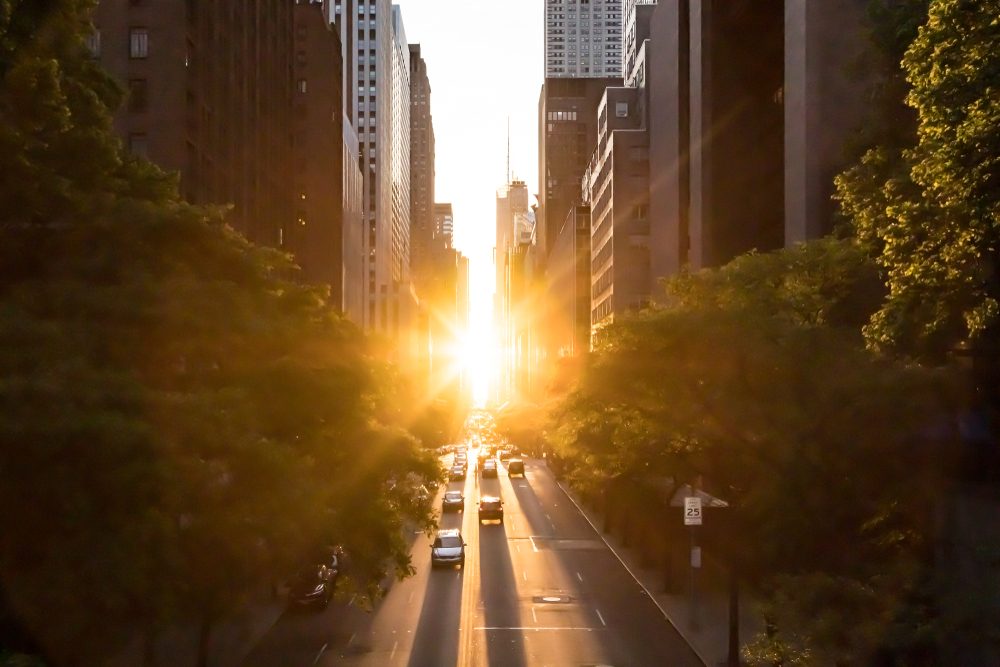 If you’re in New York at the beginning of summer, don’t miss the Manhattan Solstice! It happens twice a year, around 28th to 30th of May and 11th to 13th of June. The sun sets perfectly in between the buildings of the east-west streets, and makes for a great photo opportunity. The streets fill up with people watching the sun go down and it’s a beautiful thing to experience in the city.

How to save money on your New York hotel booking

By booking your New York hotel and flights with the same provider, you can save money on your overall booking. It’s often cheaper to book flights and hotel together at the same time, rather than make separate bookings.

Looking for more? Watch this video of Dieter, one of our travel experts from eDreams, who will take you on a tour around his favourite things to do in New York.

Getting to New York

For the best travel experience to New York, choose one of these airlines that have been rated the best airlines in the world for 2021. Click through the images below for a short summary: 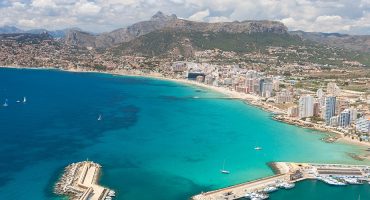 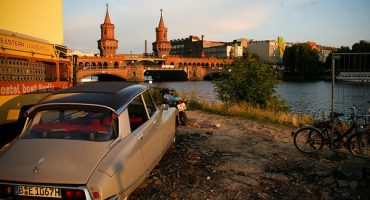 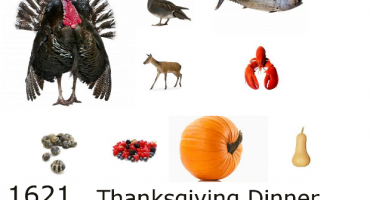 Thanksgiving Dinner from 1621 to Now

Made with for you
CMP /